This observer has just had a browse at the the Highland Council's e-planning pages for the King Street application file. There have been a number of submissions recently both in support and against the application and all those serious students of Nairn planning matters that have been paying attention to this matter may wish to go and read the latest material which can be found here both under the comments and documents tabs.

It will be interesting to see what attention Councillors from other parts of the Highlands will make of all this material when the decision is eventually made. It seems unfair perhaps that given there has been so much debate locally that councillors from elsewhere will be the ones that decide, but that is the nature of the Highland Council planning set-up

There are personal pleas for much needed housing and the CAB, worries about parking, more from the Community Councils and Nairn BID. One particular submission caught our attention this morning from Simpson and Brown architects, it reads:


We have been commissioned to comment on this application on behalf of the Nairn Residents Concern Group and private individuals.

We object to this application due to the following concerns;

The regeneration project for central Nairn is clearly important. Regeneration of a historic urban area should start with the conservation of existing buildings of value. This must include listed buildings but should also include all stone buildings. The underuse, dereliction or demolition of these buildings would harm the historic character of the area. If these buildings are in good condition and in a sustainable use, then they enhance the character of the area in a way that no new building could achieve.

Effective and well considered planning for the regeneration of a historic area must enable a sustainable new use for the listed and other heritage buildings. A proposal which puts a further constraint on the already difficult to achieve conservation of existing buildings, is poor quality planning. We consider that it is vital that this application should include, in its design statement, an explanation of how this project aids or impedes the regeneration of the surrounding area. This should include an options appraisal for the school and police station buildings. This study should include an assessment of the possible uses of the buildings and the amenity, servicing, and parking requirements for each use. This kind of assessment is needed before the new building is designed. If the proposed building overshadows the existing buildings to the point that they could not be used for conversion to housing or offices, for instance, this consideration should guide the design to reduce overshadowing or proximity. If excavation or services trenches for the new building could also include the necessary upgrade to services for the existing buildings, then that would save money in the regeneration project overall.

The building only responds to the historic urban grain because it is a rectangular building set at right angles to the direction of the main street. In a historic context, understanding urban grain is essential before producing a design. It needs to be considerably more subtle than has been shown for this application. The ordnance survey maps of 1866 and 1904 show that the plots for houses on the High Street ran at 90 degrees to the street, as would be expected in any Scottish town. However, due to the high status of many of these houses, this grain was not particularly urban. The area around the free church and school was not developed apart from the gardens, and presumably, garden walls, until the late 19th century. For its first half century, the building would have been visible from the west and east. The development of the immediate area involved three major buildings - the Free Church of 1840, the Free Church School 1847, and the Police Station 1869-1902. This means that the two surviving buildings were two thirds of the total of the first and only generation of development of this backland to the north side of the High Street. Paramount in responding to the urban grain should be a respect paid to the surviving buildings which are now the only surviving record of this urban grain. Without them, we would have no above-ground physical record of the urban grain in this area, or of the character of development, or of the attractive sandstone used to build them.

More on the NRCC webpages here.
Posted by Graisg at 5:40 PM 5 comments 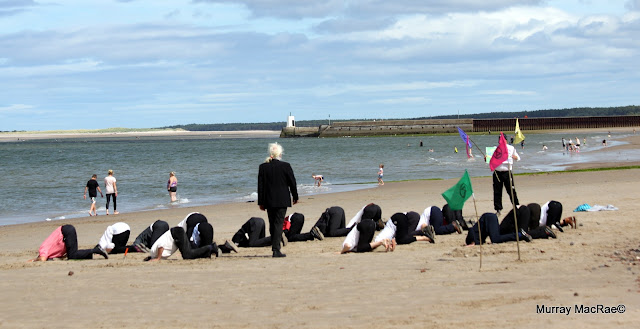 Click images to enlarge
Posted by Graisg at 4:54 PM 0 comments

We're old media now too, most news in Nairn breaking over on Facebook these days but we still have our moments from time to time.

In the meantime if there's not much being posted here it's worth having a look at the Gurn twitter account. Quite a lot happens in the Nairn twittersphere these days and you can scroll down the wee twitter box on the right hand side as far as you like to see what the latest craic is. You don't have to have an account to look at tweets either.

Tweets by @GurnNurn
Posted by Graisg at 3:30 AM

NoHumanEye in another collaboration with local loon and filmmaker Rowen Henderson.
Posted by Graisg at 6:19 PM 0 comments