All went well today and quite a few folk turned out to see the removal of the Courthouse steeple as the renovation works by the LTM Group continued assisted by a crane from the Stoddart company.

A picture below of the some of the team involved today and also images from Murray MacRae. More Gurn images of the operation coming soon. 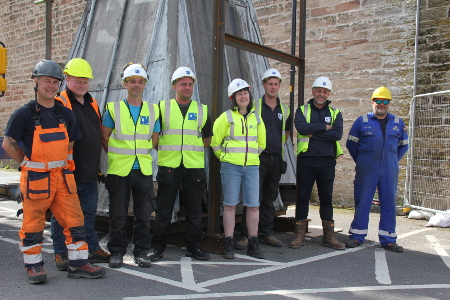 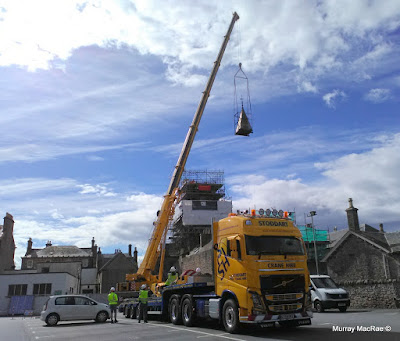 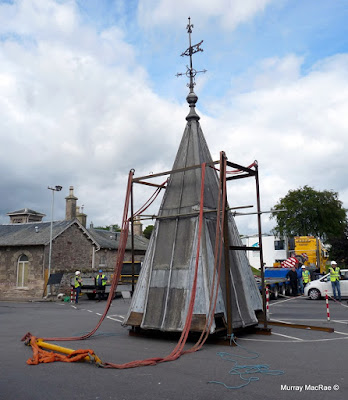 With River CC in abeyance then that is the case, if you wish to take your concerns to a public meeting and get an airing in a forum where Highland Councillors and the press will be present then you only have one option just now until the Community Council elections in November when sufficient candidates may come forward to allow Nairn River CC to be restored. Tonight at the regular meeting of West and Suburban CC however there was an invitation to all those remaining River members (left in limbo by the decision of Highland Council to shut them down) to join West and Suburban as non-voting associate members. A decision that, for now, effectively gives us a body that has representatives from most areas of the town.

There was talk too of the future of Community Councils in Nairn and whether sufficient people could be attracted to the forthcoming elections this winter, particularly younger people who, it was mentioned, seem happy to comment on issues on social media but unwilling to take the further step of attending meetings, let alone stand for membership. One option for after the elections might be another attempt at a single council officially representing Nairn or a return to the idea of joint meetings.

There was a lot of stuff that folk might have found interesting tonight, perhaps the CC should experiment with a live Facebook broadcast to enlighten folk of how issues are discussed and how contributions can be made. Tom Heggie and Peter Saggers (two Highland Councillors) present were
asked about a number of issues such as car parking charges (nothing yet), the failure to come up with a new flood prevention scheme (nothing new yet). News emerged that Highland Council are talking with the BID about a deep-clean of the High Street and surrounding areas. The CC in conversation too with the BID about the nascent improvement organisation paying for £4,000 for the installation of the Christmas Lights this year (a price that Highland Council will be demanding). Talk too of the BID taking the fireworks cash from the CC in the future and then organising a display but that could be some way off.


And there was talk of the A96 bypass inquiry results being with Scottish Ministers by the summer (that'll be starting soon no doubt). The Courthouse works have gone over budget according to Tom Heggie but the Council will be paying out for that. There were one or two other things mentioned as well and no doubt the Leopold Street Thunderer will have some details for interested citizens to digest next week.

It was an hour and a half of the issues affecting the town, very interesting, it's all we have in the way of a democratic forum for the town – will sufficient people come forward in November to allow one or both of the town's Community Councils to continue?