One of our regular readers was at last night's Nairn West and Suburban Community Council meeting at the Centre and was kind enough to submit the following report:

Nairn West and Suburban Community Council meeting was notable, yet again, for its absence of Highland Council councillors with only Cllr Heggy putting in an appearance and no apologies being recorded from the other three.

Unsurprisingly the vexed issue of charging for car parking in Nairn came up again.

Cllr Heggy stated that there is going to be consultation about car parking in every area of Highland including those with parking charges already like Inverness and Fort William. The chairman for the evening pointed out, as has others have done before him including Gurn Nurn, that parking charges have been shown to be deeply damaging to high street businesses elsewhere in Scotland and Nairn is likely to be similarly affected. And all for such a small amount of income for the council compared to its overall budget.

Bill Young said that under a recent change in the law Highland Council has to legally consult with community councils over any change of use of Common Good assets and made powerful case that using Common Good land to raise money for Highland Council was wrong. He also pointed out that there is still no Common Good asset register so it is impossible to reliably determine precisely which car parking in Nairn is involved.

Cllr Heggy said that, if parking charges are imposed in Nairn, then any nett income from parking on Common Good land would be retained by the Common Good.

Sadly no one then asked why, given that this was the case and that pretty much the whole town was opposed to parking charges, the introduction of charges for parking on Common Good land was still being considered.

The meeting also heard an update from Janis MacLean, Nairn BID manager. A Food and Drink Festival is being planned for 12th-14th April. A planning workshop will take place on 18th February. Total BID income is estimated at £100,000 per year and, among other things, they are investigating ways to improve the look of the high street.

The issue of car parking around Tradespark shops and dangers with buses stopped there too was briefly raised and will, no doubt, come back to later meetings.

And finally Andrew Randerson announced that this was his last meeting as he is stepping down from community council to concentrate on other ways to help the community.

And it's a two for the price of one day on the Gurn folks, here you can see Andrew Randerson's round-up of last night's events and the complements he is receiving for his period as an unpaid volunteer Community Councillor.
Posted by Graisg at 2:10 PM 2 comments

Work will be undertaken in February to restore the all abilities path from the East Beach car park to Kingsteps.

The path, on Common Good land, leads to the edge of the Culbin nature reserve and was made all abilities around fifteen years ago in association with the Nairn Access Panel. Since then it has become encroached upon and very worn due to its popularity. It can no longer provide access for wheelchairs, buggies, or those unable to negotiate the narrow and bumpy conditions, and water pools 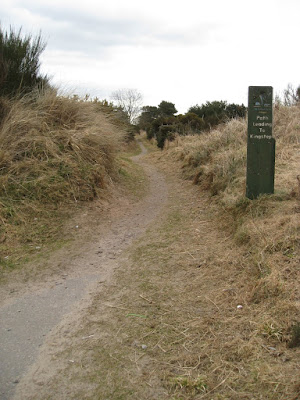 Nairn Improvement Community Enterprise has now worked with the Access Panel to obtain grant funding of £18,500 for the project from the Landfill Communities Fund, RSPB, Nairn Access Panel, and Nairn Ward Discretionary Fund to restore the path, and a very experienced contractor Highland Conservation Ltd. has been appointed.

For health and safety reasons this will clearly cause some inconvenience to regular users as the construction work is undertaken, but diversions to alternative routes will be clearly marked from the car park when necessary, and there will be no problem with access to the beach or dunes.

While following national policy to encourage outdoor access for all with the health benefits it brings, it will be really rewarding to see locals and visitors of all abilities enjoying once more the wonderful landscapes, birdlife and photographic opportunities which this route provides.
Posted by Graisg at 11:24 PM 0 comments