An article appeared on the front page of this week's Leopold Street Thunderer “Local Councillor calls for wider membership of Community groups”. The Gurn understand that some in the local community councils have seen these comments as an attack on the local volunteers that take up the role. One former Community Councillor Graham Vine took particular exception to what Conservative Councillor Peter Saggers had to say in the local paper and went along to last night's River CC meeting.

Peter Saggers had stated to the Nairnshire: “The last time there was a contested election in Nairnshire was, I believe, 2006."

Graham held up newspaper cuttings  which proved that this was not the case and expressed his concerns on the comments.

Here at the Gurn we had read the Nairnshire article and had thought that perhaps Peter Saggers was correct as there hadn't been an election recently but that maybe 2006 was a bit far back, although time does seem to move very fast these days so perhaps that date was correct. After a wee blether with Graham last night we searched the Gurn for evidence of contested elections and perhaps readers may be interested in an article we published in November 2009:

“One of the stars of West Community Council lost his seat earlier today as the count was held in the Courthouse. Graham received 136 votes. Another prominent member of the West came in 5th with 195 votes, enough to see him elected but this observer had thought Brian Stewart's recent prominence on planning issues might have seen him climb a little higher but the people have spoken.

However the women of the moment is the lady who kicked ass over the Regal and got results. Reports are coming in from the West End of Kalashnikovs being fired in celebration to honour Rosemary Young for topping the poll with 354 votes, she was nearly 100 votes ahead of the nearest contestant. There was a 49.84% turnout in the West area.

Meanwhile in Suburban Dick Youngson topped the poll with a massive 630 votes in a 35.11% turnout. In River all safely home with 0 votes apiece.”

We also have an article from the River CC election of that time too: 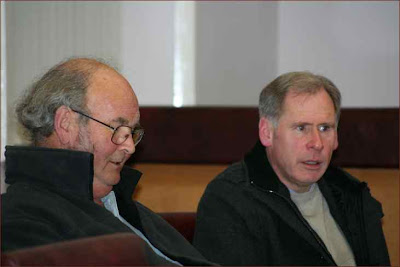 The results were announced by the Returning Officer Louise Clark at the Courthouse this evening. A healthy 28% of the electorate in the River Community Council area returned their ballot papers and the following were elected:

Provost Liz MacDonald congratulated all reelected and newly elected councillors and wished them well for their term of office. A good result for democracy and an indication that many Nairnites show a keen interest in community council affairs, it bodes well for the future and a possible single Community Council for Nairn within the next two years. 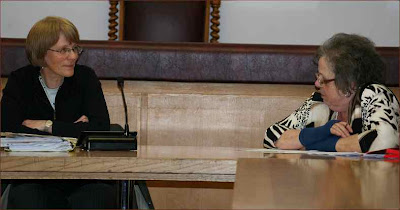 Louise Clark prepares to announce the result , Jean Tolmie to her right "

OK folks there might not always be elections to the community councils but when there is the support for the candidates can be as impressive and even surpass the turnouts for Highland Council elections. Here at the Gurn we would contend that the standing of the unpaid Community Councillors is just as high in the Community as that of their £16K basic Highland Council counterparts. Let's consider the 34 year contribution made by the late Jeanne Tolmie to Nairn River Community Council and the town's well-being for example.


It would be wonderful if more people would stand for community councils as Cllr Saggers wishes but with their funding being cut and with the authorities expecting them to participate in so many “consultations” and attend meetings during the day, it is hardly an alluring prospect for many citizens. The Community Councils remain somewhere where people in the town can go with their problems and seek help however, or at least seek a platform to bring issues to a wider audience.

Perhaps if Highland Council would in fact listen more to what Community Councils have to say? After all let's just take parking charges and who is reflecting the will of the community here – the Community Councils or Peter Saggers and his two Independent colleagues?
Posted by Graisg at 10:23 AM

Quite apart from the history aspect, this illustrates a disturbing feature of local and Council politics which sadly, is not new.

Some months ago we saw an unjustified and intolerant front-page attack by Councillor Heggie on the volunteers who serve on Community Councils. That revealed more about the Councillor's own attitudes and prejudices than it did about those he targeted. But we saw no retraction or apology.

Now we have a Councillor - Saggers - who didn't get his facts right. But worse than that, he has then used his mistaken and incorrect assertion about allegedly uncontested elections to disparage and implicitly criticise the position, legitimacy and role of Community Councillors.

He needs to put the record straight publicly and apologise to those he has offended. Neither he nor any of his colleagues even bothered to attend the recent River CC meeting. If he took the time to engage with the knowledgeable, elected local residents who serve on such bodies, he might learn something useful.

The worrying point is that there is a pattern here. It is unwelcome and unhealthy. It reflects badly on the attitudes and motives of our paid Councillors. We expect better than this.