Can you help the Bonus Club?

"Nairn Bonus Club needs your help
We are looking for 2 paid staff to join our group from 7-9pm on Monday evening at the Community Centre Nairn, to support learning disability adults to enjoy a range of activities. This is a very rewarding post, which helps the adults with social interaction with others in the community, enhancing their confidence and independence.
An SVQ in social care or experience working with learning disability adults preferred.
If you are interested in joining this happy friendly group please Contact Georgia on 07929219287 for an application form and job description.
Closing date for applicants
Monday 20th September 2021"
Posted by Graisg at 6:50 PM 0 comments

"Traders in Leopold Street have found the exhaust emissions pervading their premises." NWSCC call for action on pollution from traffic jams

In a letter to the town's four Highland Councillors, Sheena Baker, chair of Nairn West and Suburban Community Council states:

"This CC is concerned at the exceedingly high level of exhaust emissions along the A96 and Leopold Street. This is detrimental to the health of anyone walking, living, or working in the vicinity.

A few years back, Johnny Moran of Scottish Government initiated monitoring equipment being placed by the school. Regrettably, this failed to return any results as those present at his meetings were advised the equipment may have been vandalised!

Time moves on and with the ever-increasing traffic delays throughout Nairn, especially the A96 and Leopold Street, we believe it is now a matter of urgency for the pollution levels to be monitored.

Traders in Leopold Street have found the exhaust emissions pervading their premises. With the warmer summer weather shop doors are left open and the fumes are noticeable in their shops. This is not a healthy situation for the business owners and their staff all of whom are in these buildings for many hours at a time. Customers have also noticed the fumes and whilst they may not be breathing them in as the staff are for protracted times it will still be having a detrimental affect on their health walking along the roadsides with the queues of static or extremely slow moving traffic.

The lights at the Leopold junction clearly need attention as do the Lochloy junction set. If lucky, four sometimes five cars manage to get out of Leopold Street before the lights change again. When the traffic is backed up across the A96 yellow boxes and along the front of the bus station car park sometimes only one manages to get out.

Can I ask the four of you to initiate a scheme to have monitors placed in several locations along the A96, especially near the many sets of lights where traffic is stopped? Likewise, in Leopold Street, either of the area close to Brambles or Hair Dimensions would be good locations."

In their submission to the consultation Nairn West and Suburban Community Council state:

"Whilst we are not the statutory Community Council, we feel we should communicate thoughts on the concept design relating to the original idea first mooted over thirty years ago which has now become an early stage consultation. These thoughts reflect many comments we have heard from residents of Nairn and Lochloy.

We welcome the opportunity to provide input at this early concept stage prior to it progressing to the design and planning phases.

The proposed site has been significantly compromised due to the release of the allocated land to developers and the subsequent building of houses immediately adjacent to the proposed bridge crossing location. On the Balmakeith industrial park there has been a similar occurrence which has been only partially mitigated by the allocation of a gap site for a compliant ramp and the connecting path. We now feel that the current proposed site is now so compromised in reality it is unsuitable for the proposed crossing and that none of the designs made public are suitable or satisfactory.

We would suggest a possible alternative would be to move the actual crossing approximately 500 metres east of the current proposed location, this alternative location could use the existing landscaped mound and shrubbery to mask the abutment ramp on the north side and a straight linear ramp on the south side could connect back to the original planned gap site. This would benefit cyclists as well as pedestrians and would neatly link into the existing excellent path network within the estate. It would also connect up current housing such as Boath Park and beyond to enable them to walk or cycle to the King Steps and Culbin Forest areas and further afield.


Whilst possibly outwith this current consultation we would like to suggest that a new road link at the east end of Lochloy linking with the Nairn bypass should be considered during the early stages of the select and concept process. Additionally, we consider that future DCs collected from recent & further development in the area should be assigned and allocated towards a south and east link over the railway.

Developers contributions have been collected from every house built in the now extended Lochloy area. We would urge some blue sky thinking on this aspect at HC to redeploy these collected DCs in the event that a bridge proposal does not go ahead. The use and allocation of DCs for community facilities should reflect local priorities/needs and be based on consultation with the community which needs to be public, open, and transparent. Current DC guidelines 2018 state that contributions will not usually be tied to the delivery of any given project.

If the Lochloy community come to the majority opinion that in 2021 the crossing is no longer relevant or required we would strongly recommend that the funds be reassigned to other local solutions which take account of the changed circumstances and which reflect the current identified transport and community needs.

We in NWSCC are keen that the planned Local Place Plan for Nairn is accelerated and commenced speedily and that issues such as a south and east crossing would be considered in this process.

We trust that you will all reflect on these views and that should any other thoughts or proposal/s be put forward in the consultation or subsequently, HC will consider them positively and will take the opportunity to consult fully with local residents and community representatives." 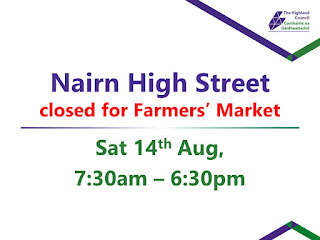 A Special Public Meeting of the Nairn River Community Council

will be held online via Zoom on

"Members of the Public wishing to attend the NRCC Meeting should send an email to: nrcc.online@outlook.com including their name and postcode. The invitations will be sent close to the meeting time."