Perhaps about 200 people backed into the ad hoc area that becomes a room behind the stage last night as Sam and Sue Hey presented their ideas for the Links, Viewfield and the town centre. A gathering that allowed many people to articulate their support for the ambitious project and to express their desire to see sensitive and positive development in Nairn and a lasting memorial and tribute to a wonderful boy. 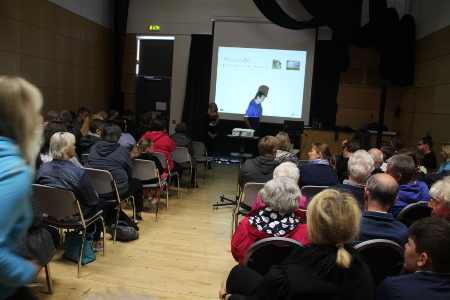 It was good to be in the presence of so many people that back a vision to see Nairn back on the map with a series of improvements that would roll out as time, money and permissions allowed. Nothing is set in stone and Team Hamish are looking for feedback on their plans - the presentation boards will  be available for view in the Community Centre from Saturday and at other points in the town.

It will all work within the framework of the consultation that will follow the Council's scoping exercise for the Links which will in itself give Team Hamish and any other interest groups and individuals such as the Harbour Working Group a chance for further input.


Team Hamish see a remodelling of the town centre car park areas as a more welcoming area for people arriving in town and then trying to encourage people down to the Links via Viewfield, an area where more interesting features such as sculptures could be added.

The putting green would be redesigned too with ampitheatre style seating on the slope that borders the road at the back of Marine Flats with the inclusion of multi-purpose Beach Hut structures that could be used for the like of Arts and Crafts activities. A new children's play area would be built in the scrubland further down towards the beach from that area with sensitive tree screening for Marine Cottages. There would be a water play feature in the area of the paddling pool that would be open all year. Dolphin viewing platforms and other features including an upgrade of many of the paths including interesting features at some of the junctions. The area for the plan is from the Swimming Pool to the Harbour.


For further details of where to see the plans and contribute your views keep an eye on the Team Hamish Facebook page here.
Posted by Graisg at 7:53 AM