"For the provision of only 15 parking spaces, the demolition of this group of buildings is not only a significant loss architecturally but also a significant loss to Nairn's history and character." Highland Council department criticises King Street Flats/CAB plans


What is remarkable about this comment from within the Highland Council apparatus is how it it mirrors a huge amount of the concerns reflected in submissions from Nairn residents and organisations. Here it is:

"The proposal is for the erection of 12 flats on an area currently used as car parking, and the demolition of a group of traditional stone-built Victorian buildings (former council offices) to provide 15 parking spaces for the development.

The proposed development is located to the west of 4 and 6 Courthouse Lane, a single storey Italianate Category B listed building. The building was once dominated and overshadowed by the large and featureless 2-storey rear extension to the free church. When the church was demolished it opened up views of the listed building which not only significantly enhanced its setting but also increased its prominence and presence within the wider townscape. Although the proposed development is located slightly to the north of the church, and the impact will not be as pronounced as previously, it will nonetheless reinstate a significant solid mass to the north-west of the listed building, partially obscuring the building from King Street and isolating the building once more from its wider context. 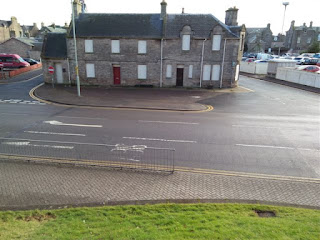 Demolition of existing buildings
62 King Street is composed of four buildings in a U-shape with a central courtyard. All are of stone construction with slate roofs with wide coped end stacks. They likely date to around the early to mid-19th century, but could be earlier and are unlikely to all be contemporary; the plainer 2-storey building to the left of the two facing King Street for example appears to be earlier in date to the more finely detailed 1 ¾ building adjacent, with its canted bay and attractive stone dormers. There is a single storey wing to the north and a public toilet block forms the east wall. Although all buildings are currently boarded up and unused, they have a significant street presence and could make a very positive contribution to Nairn.

Although the buildings are not listed or in a conservation area, they are quality stone buildings with some fine architectural detailing. They are prominently sited on one of the Nairn's main thoroughfares which, over the last 50-60 years has lost most of its traditional and characterful buildings, including the free church once located on the site of the proposed flats, primarily to car parks or poor quality modern development. It would seem a retrograde step to demolish what appears to be a perfectly functional group of historic buildings of considerable character and townscape value to provide 15 compensatory parking spaces for the new development. The existing buildings not only have considerable embodied energy but could also accommodate multiple additional housing units; I would want to see much more detailed consideration given to how the existing asset could be better and more sustainably utilised. Additionally, given that this is town centre development, that the proposed flats are located in an area already largely dominated by car parks and that Nairn has good public transport connections by road and rail, are there no other options available to the applicant to deliver 15 parking spaces that do not require the demolition of this group of historic buildings?

For the provision of only 15 parking spaces, the demolition of this group of buildings is not only a significant loss architecturally but also a significant loss to Nairn's history and character. In both conservation and sustainability terms I am unable to support this part of the application without further justification and evidence that demonstrates that there is no other option and no other viable solution. Therefore the Historic Environment Team objects to the proposal.

The proposal is contrary to Historic Environment Policy for Scotland, specifically policies for Managing Change (HEP2 and HEP4) - happy to expand on this if required. Furthermore, the proposal does not accord with Policy 57 of the Highland-wide Local Development Plan which requires the Council to judge proposals in terms of their impact upon the natural, built and cultural heritage. As an application relating to an unlisted building listed on the Highland Historic Environment Record (previously Sites and Monuments Record), Policy 57.1 states that developments are suitable where it can be satisfactorily demonstrated that they will not have an unacceptable impact on the protected amenity and heritage resource. In this case the unjustified demolition of a good quality and attractive grouping of Victorian buildings and consequent negative impact to the wider townscape for the purposes of providing additional car parking is not considered to be acceptable."

Isn't this what the Nairn River Community Council brought to light quite a few months ago now. At a meeting I attended one night to bring up the road problems at Kingsteps, I remember this being discussed. Their planning rep is always on the ball, I learnt stuff from him about the sewer system.