Observations on where Covid Community Cash went in the Highlands - questions to be asked on Nairn's share or lessons to be learnt?

One of our regular readers has seen a document from July that lists Covid Community Grants payments made from Highland Council to areas of the Highlands. Our observer suggested we look at COVID-19 Grant Awards Appendix 1 in a document that went to the full Highland Council committee on 30 July and was entitled “Review of Covid-19 services: Humanitarian assistance and food supply”.

The early part of the year and the full lock down was an extremely challenging time for communities and for the local authority and the needs of each area would have been very different perhaps – as the document itself says:

“The scale of the task has been considerable. By 10 July 1,234 shielding people have been supported to access Scottish Government food boxes, a further 1,024 households have been supported to access our food support, just over 6,000 bags of emergency food have been distributed, medicines have been delivered to 438 people, 174 people have been referred for welfare support and over 200 for social support. We have received over 6,100 calls for support, advice and guidance and made outward calls to over 5,000 to understand their needs and check in on their well-being as well as face to face contact through deliveries. We have borrowed over 120 staff from across Council services, engaged over 120 volunteers from HLH, Eden Court and worked directly with over 110 community bodies. We have redeployed our fleet and made alternative use of council buildings.

In looking at the appendix however (Click on the image below to enlarge) our regular reader maintains the following can be observed:

“Nairn(shire) with the second largest urban centre in the region and 5.5% of Highland population, got precisely 0.22% (£4,906) of the total money dished out to Highland communities.

As we said above, horses for courses and all that and things could have been very different in other places. Gurnites will remember that the existing and new networks that popped up performed really well from a standing start and maybe our community networks needed less help to perform to the best of their combined abilities.

We hope however that our Community Councils will quiz our elected Highland Council members as to why Nairn was presented with or needed such a small amount of cash compared to other areas in the Highlands and whether any lessions can be learned here for the future. 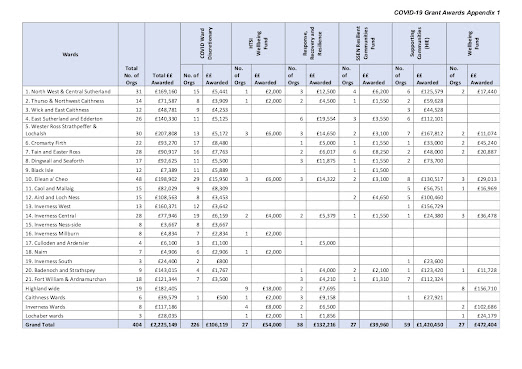 Click image to enlarge
Posted by Graisg at 7:47 PM