At tonight's online meeting of Nairn West and Suburban Community Council the chair, Sheena Baker, asked Brian Stewart to outline the current feeling of her organisation in relation to the Highland Council proposal to sell the Sandown Common Good Land. Brian said:

“Our view and we have discussed this in preparatory discussions of West and Suburban Community Council is that the sale proposal as currently set out should not proceed. And most of you, I suspect, will already have seen public comments made by Sheena as chair on the views and concerns that this community Council has. In summary:

We are unhappy with the idea that this should proceed. Firstly because the current Covid constrictions and costraints prevent proper public consultation and discussion. Secondly, because in our view this is the wrong time to attempt to sell our prize principal asset, with the economy in recession, land prices depressed, the Common Good will not secure best value. Thirdly it is our view that the case for selling the land at this time and in this way has simply not been made. There is no rationale and there is no business case presented to the public. Fourthly, other options apart from sale have not been considered and assessed. This proposal, as it has been put out for consultation, is to sell the entire site as a single deal to a large developer because who else is going to buy it as a job lot. Possibilities such as long leases, phased partial sale, community self-build, local buy-out and many other variations at least need to be evaluated. 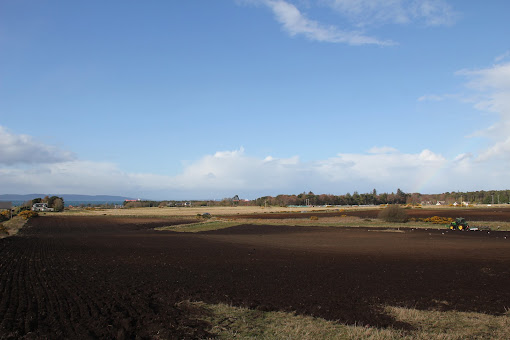 This underlines our central concern that there is no policy and no strategy for managing Nairn's Common Good, or if there is we have no real idea of what it might be and the community certainly hasn't been consulted about the policy. So as well as opposing the principal of this proposal at this time, we believe that, especially given the law on engagement with communities, we as a community should be involved in the policy making and priority setting from the earliest stages. For that reason we have collectively agreed that we will also wish to submit a formal participation request asking that we be given the opportunity to take part in setting the policy – not just commenting on proposals that have already been drawn up without our knowledge. So at this point I'm going to pass the virtual microphone over to Bill who is going to explain in more detail what it is that we envisage doing by way of action on the Sandown proposal.”

Bill Said: “There's two elements of this, there's the consultation which Brian will perhaps come back too shortly and the second element is the participation request to invite ourselves in to be part of the future management of the Sandown Land and we recall Mr Gillfillan in 2012 reading the Riot Act to the Community Councils, telling them there was actually no place for a Community Council in the management of the Common Good Fund. What since has changed is section 22 of the Community Empowerment Act which makes it very much right that Community Councils do now have a place at the table and we'd like to exercise it.

The outcome, or the rationale, is to improve the outcome. At the moment Highland Council are hopelessly, and hopelessly, conflicted – for no fault of the current trustees, the Council appear to to have tried to help themselves to £344,000 worth of the Sandown Land, it's represented in the Council accounts of 2014 as an asset. There's two things which are wrong with that. The first is that in general trust law, the trustees are not allowed to acquire the assets of the ward. And the second thing is they didn't take title to a specific area, it's £344,000's worth of the whole. So, the point of law is that you are not allowed to get your funds as a trustee mixed up with the funds of the ward. So there's two things wrong with that.

Now there was a previous planning application in 2018 which was first office of estate, it was an environmental assessment for part of the land, not the whole of it. Now that came to grief for various reasons and, which was all reported in the Nairnshire, and now this is now a reincarnation. There's a document from the Council – strategic housing which identifies Council owned sites suitable for housing and on that the first application was for something like 80 houses, it's now been cut down to 50 houses. Now, there's no part of a Common Good Fund is appropriate, sorry no function of a Common Good Fund is to provide housing. It's just not right, and the Common Good Land was acquired 400 years ago and if there were some need for a Common Good Fund to provide housing there would be some examples of that right now. So for first principles it's wrong. We think, or we want to make the representation that the Council need assistance to overcome their conflict of interest. Now we have no conflict of interest, we are 100% on the side of the Common Good.

The Council were never, ever elected to deal with the Common Good. What the guy in Achiltibuie, well, his interest in Nairn's Common Good Fund will be absolutely nil other than the fact that some of the money we are now spending from the Common Good to support things in Nairn which ought to be provided by the Council will mean that there is more money for him in Achilitibuie. So that is why we want to invite ourselves in to participate. It's not to be negative, we just want to be sure that we sell the ground for the right reasons, at the right time and we comply with the law. We've drafted a draft and it's now being finnessed by some other members of the Community Council to smooth some of the rough edges if you like and I think we have already agreed that from a policy point of view we are going to launch that in the appropriate time.”

Bill referred to the time allowed for this item and offered to move on. He was in fact told by Ally MacDonald who was running the Zoom session that there was still 10 minutes allocated. He added:

“I think I've really said it all, this is a fairly technical document, we need to get it right. We have to comply with the law and we have to ensure that we give the appropriate reasons and we have a number of examples of conflict of interest. In fact far too many and I think we will, will finnesse it up and look at it and see what happens. It can't really do any harm and it might do some good.”

Sheena Baker, then said: “OK so we know that Bill has drafted it and we know that there are one or two other people are reviewing it with him, so it is not ready to roll yet. I need from Nairn West and Suburban the OK for us to submit this participation request as and when it is ready to go. Everyone happy?”

The other members gave their consent. Shena continued, “But we do just feel very, very much at the moment that this consultation is happening when the public cannot participate. That is wrong, that is fundamentally wrong and we are taking the other action that you have heard today.”

Later in the meeting Tom Heggie was asked some questions about the proposed sale and this too turned into an extensive session, we will report some of this later this week if time permits.

Highland Council should be stripped of any involvement in Common Good issues or sales, they cannot be trusted.

I agree with you, but just who do you think is going to make that happen?

If we had our own local Nairn Council, then these Councillors would be the local Trustees. We haven't had a District Council since the Tory Party did away with them. We haven't had a Town or Burgh or County Council since the Labour Party did away with them. After independence, we need a fullscale reform of local government that brings back local Town/County Councils across Scotland.
Until then, the reality is that the Highland Council are collectively the Trustees of all the Common Good funds across Highland, including Inverness and Nairn and Tain etc.