Aye "density" - a planning application that just packs them in a bit too much?

Readers here may have seen the article in the Leopold Street Thunderer this week on page 5 which has an Architect's impression of the type of houses that are proposed by Deveron Homes and Albyn Housing for the plot on the vacant ground just past the railway bridge on the Forres road - the former site of the Bungalow that Jacopo Morganti and his family used to live in.

Get yourself a copy of the Nairnshire to see the drawings or go online and have a browse here on the Highland Council e-planning site. It will be remembered by many perhaps that Deveron Homes received a lot of grief over housing density with their plans for the Sandown Lands. A quick Google search will bring you up to speed with everything that happened there. There was a public inquiry and a lot of suits trooped in for the duration.  It all ended badly.

So here is what the Nairnshire Telegraph had to say in it's editorial this week:

"The old Morganti land's access directly onto  the A96, on  a bend, in between two major junctions, may have been adequate for the traffic from a bungalow. A development of 31 homes is something else. Does the developer remember his Sandown experience?"

The Gurn would simply like to add that just because social housing is proposed why should it at such a density? Below is a drawing from a previous application that shows five bungalows. That application was successful but nothing ever happened. OK then how about a dozen "social houses" instead of 31 with a bit more room for the bairns and the mature trees and as many as possible of the ones that have grown up in recent years on the site retained.

Just because these are not private houses it doesn't mean there shouldn't be a decent amount of space for everyone. Let's have space for folk in Nairn be it private or public. If you think 31 houses is a bit too much for this plot then please go along and make a comment on the e-planning site here - alternatively if you think the plans from Deveron and Albyn are cool then go online and support them if you wish but we hope most folk would think a reduction in density appropriate. 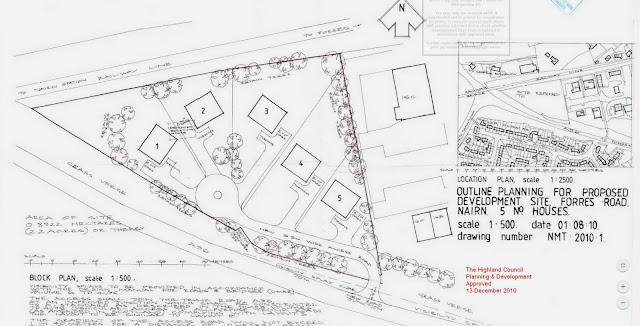