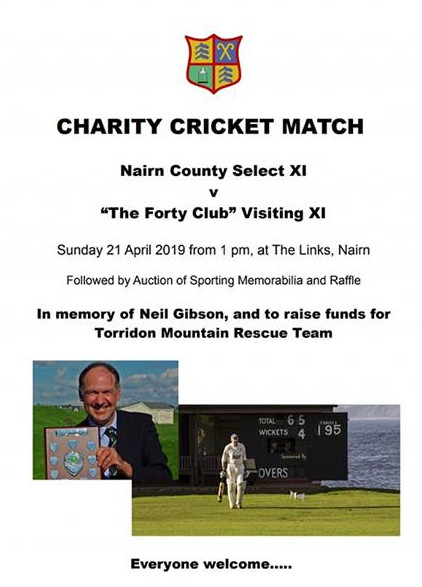 Brian told the Gurn: "the story behind all this is of course the tragic loss of a long-time Nairn resident, NCCC member and regular cricket player Neil Gibson who sadly lost his life a year ago in a snowstorm while climbing in Wester Ross. The bodies of Neil and his brother Alan and their dog were found after many days of searching, by the Torridon Mountain Rescue Team.

So in memory of Neil, and to benefit the Torridon Mountain Rescue Team, the cricket club decided to organise this cricket match as a fund-raising event. We're playing against a visiting team from "The Forty Club", a group of cricket enthusiasts and veterans drawn from clubs around the country. We've got an assortment of sporting memorabilia to auction after the game including a bat signed by Ricky Ponting (Aussie test cricket captain and star batsman), a signed photo of the England T20 team, and also signed footy shirts from NCFC and Caley.... and various other items and raffle prizes."
Posted by Graisg at 8:59 PM