And a new supermarket on the other side of the road? 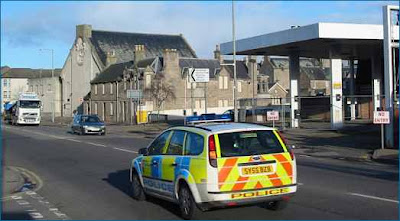 Nairn must look fairly run-down to motorists passing through when you consider all the buildings that are boarded up and waiting for demolition. Buildings that are waiting for the supermarket to take their place. Anyone know when it will happen?
Posted by Graisg at 4:13 PM

Email ThisBlogThis!Share to TwitterShare to FacebookShare to Pinterest
Labels: Supermarkets

This is actually iright's comment, changed to allow links to work in comments

The carbon footprint of supermarkets is surely very questionable?

I would fully agree that if you do not have access to transport to to take you to either Inverness, Forres, or even Elgin then you are not exactly spoilt for choice when it comes to supermarket shopping in Nairn.
But are supermarkets really the answer? Does transporting food thousands of miles make any sense when much of it could be sourced locally?
Do we want the High Street to be a ghost town as we all shop in other towns or on the
Internet

The really sad thing about Nairn is that we have an ancient object outside the courthouse called a 'Mercat Cross' but no market. If only we had more opportunities to sell stuff to each other.

Does transporting food thousands of miles make any sense when much of it could be sourced locally?

A very charged question! In fact a lot of what we buy, when we buy it, could not be sourced locally. It's a harsh reality, but strawberries in December cannot be sourced in Scotland or even the rest of Europe, unless grown by artifically-aided means. I'm not arguing one way or the other, simply pointing out the reality. I spent most of my teenage years in the Isle of Man and it was a common saying there at the time (mid- to late-sixties) that one could eat very well there from totally home-produced food provided one was happy to eat three breakfasts a day. If we want to do this then it will require major lifestyle changes for all - well perhaps not for me as I'm currently in Spain and might just decide to stay on here permanently if this idea takes hold ;) !