Is getting a flood protection scheme for Nairn more important that getting a bypass? - repost of an article from February 2020 - bearing in mind the tragic flooding in Germany just when will flood prevention work commence in Nairn? 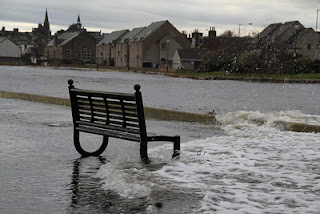 No shortage of folk in Nairn (including our polticians at various levels) who have been campaigning for a bypass for some  years now and all eyes will be on the Scottish Government Budget this year to see if funding for the bypass goes through and it becomes a reality. There is hardly a dissenter to be found, everyone wants a bypass for Nairn.

When it comes to flooding though the topic doesn't surface nearly as much as updates on the bypass and in comparison there is no fancy state of the art video of how flood defences might look. In 2016 SEPA published a document as part of it's responsibilities under the Flood Risk Management (Scotland) Act 2009. The document called for a study to be undertaken to (among other things): “Reduce risk in Nairn Central from coastal flooding and reduce flood risk in Nairn Central from the River Nairn. In Scottish terms the study had a priority of 49 out of 168 and in local authority terms 2 of 23. SEPA further adds the following description: “A study is required to focus on direct defences to provide protection from river and coastal flooding. Other actions may also be considered in order to develop the most sustainable range of options.” An indicative delivery date is given as 2016-2021.

Under the title “Economic” SEPA state: “The study could benefit 344 residential and 24 non-residential properties at risk of flooding in this location, with potential damages avoided of up to £7.7 million.”  £7.7 million in 2016 terms readers, shall we say that that might be around £10 million in 2020 terms?

The Nairnshire Telegraph reported in its edition of February the 11th:
“The Flood Protection Study for the River Nairn and coastal flood risk had not started due to uncertainty in the Capital Programme, although Highland Council's objective was to complete the Study by 2022.”

So perhaps a study by 2022 readers, and then how long for options to be discussed and then plans – let alone finance. All eyes on the Highland Council Capital Programme budget for this year too then!

It is accepted that sea levels are rising and there are predictions too of increasing rainfall. This work cannot wait any longer, Nairn needs a flood protection scheme urgently. Nairn needs a bypass too but perhaps the former is far more important than the latter.

The dangers that Nairn faces are self explanatory and outlined in the SEPA document, one could be forgiven for thinking that Highland Council acted recklessly in not undertaking this study immediately.
Posted by Graisg at 4:00 PM

.As i have said before they were told when filling in the maggot they were razing the wall higher than the one on the Fisher town side and it would case flooding on that side but the warning was ignored. There is also a burn that comes through the golf course and that would let the water back up and into the golf coures but rather than let that happen they put a heavy flap preventing the water back up. The only way to prevent flooding is lower the wall and water go in that direction not into peopl's homes.

Also what about the Burn that runs Along Balmakeith Park/Granny Barbour's road. It requires attention ASAP too.

"Building on flood plains, even on the 1 in 100 years areas is as mad as opening nightclubs in the middle of a worsening pandemic." Noah of Nairn

NO, have you seen the state of the traffic in Nairn this week.

Rising water levels is inevitable unfortunately. Looking to the future is difficult, but we do need to think of the youngsters and how their lives will be affected by changes in the weather and potential flooding on coastal areas. Sadly, there seems to be a rather blinkered mindset in some, who believe 'it won't happen to me'. Well, it might! I had a house flood and a fire within 10yrs of each other. The house flood was due to water ingress from a burn, choked up with debris such as leaves, tree branches and rubbish. When the blockage released, our house was inundated with filthy sewage water. It took over a year to be able to move back into the property, that was after a full bio clean had been done. The fire was simply 'one of those things' that none of us ever think will happen. An adaptor plug had over heated, causing it to set alight. Fortunately that damage was limited to just the dining room. However, anyone who thinks flooding won't happen, or won't be an issue in and around Nairn or any other coastal town, needs to think again. It WILL happen. The only question is, how soon? To answer the heading question, yes, flood alleviation IS more important right now than a new road link.

If the lower part of Nairn isn't going to get any flood defences then the authorities should admit that.