Nairn's new Community Orchard - a huge thank you to everyone who made it possible!

Thanks to everyone who made this possible. 78 fruit trees planted on Saturday!

Kirsty Ellen who did so much behind the scenes progressing it all with Highland Council; Mick Haymer the amenities manager for his suggestions and advice, Hamish and Veronica of NRCC who first mooted this idea three years ago. All the folks in the orchard group who worked so hard up to and including the day itself, likewise Green Hive and Keeping Nairnshire Colourful. Michael Green for letting us loose on his mountain of wood chip mulch. Mags Nicholson of Househill Farm for the donation of seaweed fertiliser and further funds for trees. Mary Heggie for three trees from Tom's plot. Nairn BID too who made a substantial donation to increase the number of trees. Mandy Murray for bringing along the Nairn Festival flags and adding a touch of fabulous colour to the day. All those who purchased a tree and brought it along, we had originally planned to plant 20 (a figure that had been constantly revised upwards to 50) but the final total speaks for itself and the generosity of folk in Nairn..

On the day so many individuals and groups who worked hard to get through the very tough turf, great to see Comann nam Pàrant and NRCC personnel too on the day.

There were others who had to go elsewhere after massive logistical efforts early in the morning. Huge thank you to Gordy Milne, Mike Bray and Dave Thoules who got another source of mulch and a lot of trees and materials to the site. Thank you all for your hard work and positive vibes during the planting – it was a fantastic morning and looking forward to doing similar stuff with everyone in the future. Nairn rocks!

If anyone thinks I’ve forgotten someone please PM me and I’ll put them in. If you would like to go on the Nairn Orchard Network mailing list for future events, workshops etc, then please PM or e-mail info@gurnnurn.com 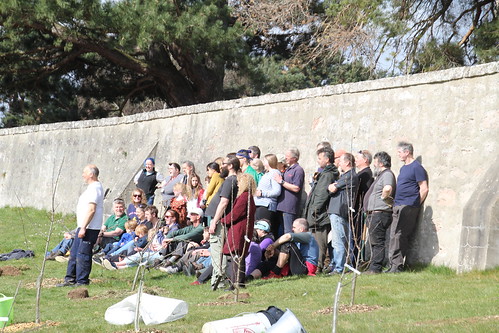