The Blue Bins are arriving 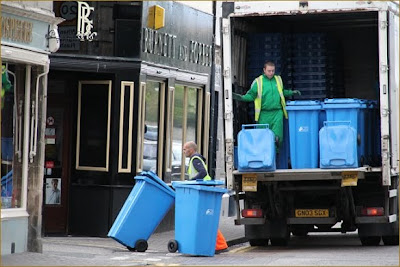 Good to see the shiny new blue bins appearing in Nairn. Here's looking forward to more recylcing. A pity glass still has to be taken to central points however.
Posted by Graisg at 6:13 PM

Email ThisBlogThis!Share to TwitterShare to FacebookShare to Pinterest
Labels: Recycling

"Brown and yellow and green and blue"

I now have a rainbow of bins outside my home.

Seems a very long time ago that we just had the midden for any scraps that couldn't be reused.

Bottles could be returned to shops for money, how about reinstating that rather than glass bins?

Will we be getting more bins, I'm not sure I'll have any room for plants in the garden, but I expect this is what they call progress?

The majority of people will just put their glass in the household bin. There is nothing to say you cann't, and some elderly people cann't carry bag loads of glass bottles and jars to the co-op recycling bins.
Can you tell that I am not a keen recyler?
When people stop driving huge4x4s and having 2 or 3 hoidays abroad each year, by the minute polluting the atmosphere, then I will take recycling seriously. This bit about every little helps just doesn't add up. It would take more than one person recycling religiously for their lifetime to maybe conteract the effects of ONE holiday to Spain!!

It is true that it takes energy to produce all our rubbish such as packaging, bottles etc

It is also true that energy is used to remove and deal with our waste, but importantly, under EU rules councils will incur penalties if recycling targets are not met

You are right however that fuel for travel should perhaps be taxed more, it would be better for the planet if less carbon was burnt

Meanwhile I would urge you to recycle and help save the council purse a little, which we all pay for!

Just read the card that came with my shiny new blue bin.

I can't recycle, plastic bags, trays, tubs pots or caps and juice cartons are out too.
Still a long way from total plastic recycling. Will people take the time to look at what can and can't go in the bin?


Instead of bottle bins,they could try
and supply a few "Clootie Bins" for all the waste

Teetotal.. people can get their shopping delivered, but there is no way they will pay to get rid of it!

Here we go again EU rules.. why oh why are we still in the EU. lets get out before we waste any more time trying for Independence, if we don't,Independence won't be worth the paper its written on!It is so debillitating for our country being in the EU.

I can remember when i was a kid me and my friends would go into Yacapo Morgantis Shop in The Highstreet and bring in the empty bottles of Lemonade and we would get tenpence for each bottle. Then we would buy heaps of sweets and ice cream off him then later on at night we would go round the back off the shop then pinch them back then buy more Sweets and ice cream and maybe a bag of chips as well if we felt brave enough. Those days are long gone. Iam sure theres more Gurnites out there with there stories that did the same.

As a member of the Nairn Youth Forum I attended the Ward Forum. At the Forum the purpose of the Blue Bins were explained.
The bins are for recycling:
-plastic bottles (without caps)
-tin cans
-cardboard
-paper

There is the possibility that sometime in the future more plastics will be able to be recycled.

If you do not put cardboard (for example) in your blue bin, you will get a warning. If materials able to be recycled are found in your green again. Your green bin will not be collected. The same shall be done with non-recyclable waste in your blue bin.

This means that everyone WILL have to recycle otherwise their waste shall not be collected.

Not collecting the rubbish -

I raised this question with a Highland Council recycling rep at the last Suburban CC meeting.
Personally I think it a return to the dark ages not to collect someone's waste simply because they do not wish to cooperate. If they really don't give a s*** they will just put it in someone else's bin and then they too won't have their waste collected.
Better to take the waste away and sort it by hand but fine the offender and charge them the manhours involved.
This "non-collection" will present problems in areas where bins are used communually. There are areas in the town, including flatted accomodation, where people just use the first bin in a row until it is full up etc. It just needs one individual to mess up the system unless padlocks are to be issued for each bin?

The rep sort of said that there would be efforts to talk to the householders involved but again - warn, then fine but don't leave rubbish uncollected.

Is someone going to come along and wash all these tin cans? I want less work not more, its ok for people who sit at home all day doing nothing.
Anyway are the binmen going to search through all the plastic bags in the household waste bin to find things that shouldn't be there. If they are then no wonder they are only collecting once a fortnight, they'll be too busy sifting through our rubbish.

What a load of old rubbish.

I notice the blue bins are flimsier than the green bins and if there is any water lying on top, when you lift the lid half of it goes in the bin.

Any danger we will get a bin in which to put our old blue paper/can recycling boxes?

On a serious note does anyone know as to what we are supposed to do with these with the advent of the new blue bins?

Yep.. these bins let in a lot of water, but I suppose if you think about it, nobody is going to dry their tins after washing them, so the whole bin and its contents are going to be a SOGGY mess anyway. So we will have to try to clean this bin as well as our other two. How do the elderly manage, I find it difficult and I am not elderly yet,
what age is classed as elderly?

They want us to use them to hold and transport our glass recycling to either the nearest bottle bank or to the recycling centre.

Bit backward! The new bins and what you can recycle in them is far too limited.

Better off adding glass to the 'allowed list', as most people will NOT spend extra petrol = more pollution etc, to go to a recycling centre just for the odd glass bottle.

The council should be able to sort the recycling out, at the depo, very much like they do, 'down sarf', where glass is allowed in the blue bins!! So why not here?

The arrival of the 'blue bins' seems to have stirred up a wide debate on the topic of waste.

I draw observers attention to the report on the trial of the blue bin scheme to Skye. It seems there were a lot of issues raised by folk on Skye, especially businesses, but they were neatly swept under the carpet.

In the past cardboard was actively recycled until it was noticed that it was costing more to collect and ship to other parts of the UK. Recycling has to be sustainable (including affordable).

The story by Ealan-Donan MacRath about the 'deposit' for glass reminds me of collecting ginger bottles from around the neighbours (you had to have the lid).

In Europe the Lidl and Aldi stores have glass and tin recycling machines in the store and customers get cash for every item they take back. In Aberdeen Stagecoach collect tin cans and give tokens for bus tickets.

Can we get our local stores (Co-op and Sainsburys) to collect our valuable waste (glass and tins) and give us money or dividend to keep up with Europe?

Have you got a link to that report please anon?

Graisg - here is a bit of background:

Decision to approve the Skye and Lochalsh trial was approved by TEC Committee on 27 May 2010. Further report to TEC Committe on 23 September 2010 stated that "concerns will be examined during the pilot". The report also revealed qualitative analysis of the budget responses that just over 240 separate comments were received on the general question -can we encourage a reduction in the amount of waste we produce and provide fewer bin collections?
The third report on 17 March 2011 stated that twelve written complaints were received in relation to the Skye trial. Amongst the main concerns raised by the commercial customers were: the lack of storage capacity for additional bins; many customers, whether on the trial or not, expressed concern about the timing of the trial and the fact that it would not capture the summer period when most businesses (especially the hospitality / catering sector) generate the most waste and would have to store this waste in the warmer weather.
Note that rescheduling of uplifts is needed to serve businesses.
The big worry is that this recylcing drive is a budget initiative and what happens if it does not work out?

What a fuss about nothing, I had one of these blue bins in Linlithgow in 2002 and in Stirling in 2007 and the system worked fine. People will get used to it, and most people will sort their waste correctly, resulting in less waste going to landfill, and less cost to the council. Yes, this will cause a problem for some people who don't have any room for another bin. Yes it would be better if they could take glass, but at least you can get rid of this at the Coop, you don't have to go all the way to the recycling centre. I was filling the boot of an estate car every 2-3 weeks with cardboard, tins and paper, and driving it up to the tip, this is much better for the environment as 1 lorry making the trip takes 50 or 100 car journeys off the road. Stop whining and embrace positive change.