How the preferences stacked up in Nairn and Cawdor ward 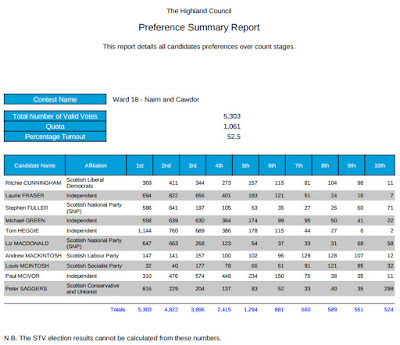 Candidate First Preference (the quota to get over the line was 1,061). As many predicted Tom Heggie came first with enough for that too.  And after the number crunching was done we got Tom Heggie, Liz MacDonald, Peter Saggers and Laurie Fraser, not sure in what order they got over the line that info will be published later by Highland Council perhaps).

You posted that info earlier. it was:

Round 9: Fraser and Saggers

Agreed... this election was, locally, about personality and party not substance. The Gurns article about how important councillor green was to the future of Nairn is spot on and to elect someone that doesn't even stay in the town instead of him is ridiculous.

delighted that Tom is in place but the main point to come from this election is the message to our councillors 'it doesn't matter if you do a lot for our ward as long as you don't pi@s a lot of people off whilst doing so'. Personality over substance!

I see conflict of interest got elected again.

Unknown, perhaps change that then to you can't understand why people elected Liz and Laurie again.

In the end the silent majority has come out and started to get more active. We have had enough of proclamations that spout forth from Bute House that those Tories are the devil incarnate and such like and that the only way to stop the forthcoming armageddon was to vote SNP; oh and by the way we're hijacking your EU vote to push for #indyref2. Well, SNP, they say there's no such thing as bad publicity and your dear leaders obsession with indy and the Tories has done the Tories no harm at all. Nationally the constitutional question is dominating everything at the expense of Education, NHS and other key areas. This has affected local politics to such an extent that even as Steven was trying his best some people (including myself) cannot bring themselves to support the SNP as it is perceived that even a local vote may / will be hijacked for the indy obsession and as such we become more than happy to support unionist candidates to prevent this from happening. It's what happens when you polarise the electorate.
So in the end it comes as no surprise that party politics comes into play locally when such division has been created due to the ruling parties obsession. I hope Steven keeps doing his thing locally as his support to Narin Play and such like is admirable.

How the hell did this happen? said...

A councillor from Inverness? Nairn truly is a suburb of Inverness now.