Tom Heggie fires broadside at Community Councils - get down to the paper shop and read all about it.

The front page of this week's edition of the Nairnshire Telegraph illustrates once more the divide between the town's Community Councils and Highland Councillor Tom Heggie. It looks like there is no going back now with Tom claiming:


"I am hearing voices in Nairn which are not present on the Nairn Community Council agendas. Community Empowerment is about hearing those voices.""

He's got more to say too and there's also a reply from Dick Youngson of the Nairn West and Suburban Community Council. 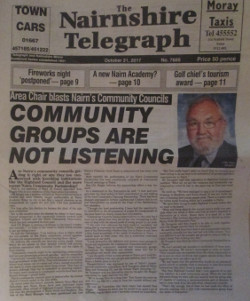 For years the Community Councils have been an arena where local folk can go and air grievances about a range of problems - often they will go there as a way of seeking help with things that do concern Highland Council, you get your issue in the public domain and quite often it will be reported in the press. The Community Councillors would argue that the way to get Community Empowerment is to get more power back to make decisions in Nairn - ideally perhaps with the reintroduction of a Nairn District Council or some similar body. Recently though we have had as a result of "Community Empowerment" legislation a body formed called The Nairn and Nairnshire Community Partnership and it seems this is the way that any "empowerment" will be delivered. There's a previous Gurn article here which examines the opportunities that this grouping may or may not provide Nairnshire:

"Partnership Dispute – “community empowerment” coming down the tracks for Nairn and Nairnshire or just another false dawn?

Tom seems to be placing a lot of faith in the partnership and to be fair to them their survey on issues that are relevant to local people did receive over 500 responses - it's early days though and it remains to be seen if a group of out of town professional folk coming to meet in the Courthouse a few times a year can effectively deliver anything that will address the democratic deficit this community has suffered since the loss of the Nairn District Council.

As we say though the Community Councils have fought their corner for Nairn over the years and many folk have been grateful that they are there. They have managed to get a few things done but are they now failing to address some concerns in the community as Tom suggests? Here at the Gurn we feel it is a great pity that a state of warfare almost exists now between Tom and the CCs - hopefully there will be a major outbreak of peace and love as we move towards the end of the year and the festivities.

We would suggest you get a copy of the Nairnshire Telegraph and have a read (including the editorial "Drawing Battle Lines") and then have a think about some of these issues raised and then, why not get involved and have your say? If there are voices in Nairn not being heard and yours is one of them - then shout it out!
Posted by Graisg at 8:22 AM