Former fire chief has still got the vital spark!

You've probably read the Nairnshire's report on the Inverness Council (opps shouldn't that be Highland Council ) Nairn ward meeting last Wednesday night up at the Courthouse and you can't help but notice that Battling Bill Shand made a dramatic intervention from the public benches and asked to be allowed to speak. Permission was granted by the worthies and the 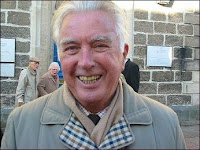 n Bill tore into them over the Bailey Bridge. The Gurn editor was lucky enough to have been there to witness the event. The former councillor had his facts and figures well compiled and there was no mistaking the gravitas and drama of the occasion as the community hero firmly issued notice on the Highland Council that the Nairn public were not going to let this issue go away.
"The reasons we get from councillors who do not support the bridge - and I don't care what they're saying tonight they are not very keen on it being opened - is that the public don't want it. But that is ridiculed by the survey that was done by an independent body," said Bill in a powerful speech that stole the show. Nice one Bill, keep on with the Bailey Bridge Battle and don't let them get away with neglecting this vital piece of infrastructure any longer.
Posted by Graisg at 6:50 PM

I find it hard to believe that a main artery (bailey bridge)to the reason why people visit Nairn (beaches)etc should not be on the highest of priorites .. must look pretty grim from visitors point of view ... perhaps parkdean would like to contribute to the fund !

The neglect of the Bailey Bridge is a happy accident that has resulted in a much safer and altogether more pleasant experience for pedestrians and cyclists. Both the holiday park and the harbour have their separate access roads. Any able bodied person who needs to get from one to the other should get out of their car and join the walkers. There is already enough insane driving in that area that is not sufficiently moderated by our "ever vigilant" police. The lack of bridge access at least prevents the boy racers having circuit races.
If any bridge need upgrading that is justified in terms of how well used it is, turn your eyes to the Merryton footbridge with its decaying railings and its narrowness.

We once lived within earshot of the Bailey Bridge. The noise from the neds in cars had to be heard to be believed especially late at night.

Personally, I would keep it closed to vehicular traffic. If the money is found, and it does re-open, I would hope that a road traffic act can be put in place that would see it closed overnight. Preferably using very large ,automatic barriers.

Cars allowed or not, and from comments it seems there is a faction that doesn't want to see them allowed on the bridge, I suppose we should ask what is the lifespan of the bridge for pedestrians if the bridge supports are not repaired.

What purpose does the bridge serve? Better to keep it for pedestrians, there are more benefits to local residents having it closed to traffic.

Who are these people who want it re-opended to traffic?

NAIRN NEEDS A BY-PASS, any funds should be used to that end and that would solve the traffic problems in the town.
The whole harbour area should be pedestrianised.

Battling Bill! - amazing how short the memories of the few are! What did he ever bring for Nairn as a elected council member.

The Bailey bridge is providing a much safer river crossing for pedestrians and cyclists than it ever did.
Since the Maggott road got properly surfaced (not that many years ago) the need for the Bailey bridge became less important.

Keep it closed to traffic I say- & prevent the boy racers from spinning the circuit.