Volunteers were out this morning repairing the surface at Station Park after the first game of the season yesterday. Everyone was in good spirits after the game yesterday. Realism and long term optimism available in buckets with the tea and biscuits too. As one of the fans said on the Balbair Road Banter facebook page about the game yesterday:


"The record book will show that NCFC were defeated 4-0 today and people looking back in 100 years will think that wasn't very good. What the record book won't show is that, all things considered, that was one of Nairn's finest performances in ages. Brora were the better team, of that there is no doubt, but every single Nairn player put in a shift of which they can be justifiably proud. No one hid. No one shirked. No one played for their own reputation."

That's the spirit, that's the buzz throughout the entire NCFC apparatus and fanbase just now and it is pretty powerful to experience. Match report here and Ronnie Sharp's reaction here. Good to see MSP John Finnie among the 300 plus crowd at the game yesterday too. John was very impressed with the facilities at Station Park and the magnificent state of the pitch.

Up at pitch repairs today was County fanatic Donald Wilson who put in a shift despite it being his birthday. Picture below of Donald with his green side up colleagues and the appropriately designed card that his wife gave him today. Pictures will enlarge. 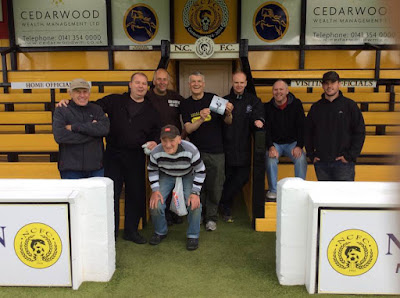 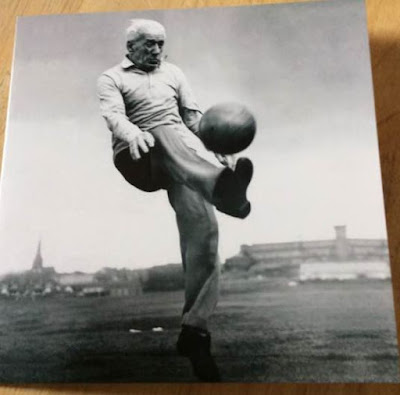 If that's the Maggot, what's the big structure on the right?

Could be the old gas works in the fishertown, there's a thought.