Here's the text of the petition published today on the Cromarty Rising site:


“Calling on the Scottish Parliament to urge the Scottish Government to consider and debate the implications of proposed ship to ship transfers of crude oil at anchorages in the Inner Moray Firth within the boundary of the Cromarty Firth Port Authority. Specifically focusing such consideration and debate on the likely impact of such operations upon wildlife, tourism, local authority funding of clean-up and how it may use its powers within the 12 mile tidal limits to protect the ecology, landscape, cultural heritage, air quality general environment and areas of high conservation value within or having continuity with the Firth.

Furthermore to ensure that environmental legislation within Scotland is sufficient to prevent such transfers of crude oil occurring in environmentally sensitive locations – this aspect was previously highlighted by Richard Lochhead MSP on 24th May 2007 where he said:

“We will give consideration to amending regulation 6 of the habitats regulations, which defines who is to be regarded as a competent authority for the purposes of compliance with the directive. We will also consider possible amendment of part IV of the regulations. As I mentioned, it sets out rules about appropriate assessment of plans and projects but only in relation to a specific list of purposes, which do not include ship-to-ship oil transfer. We will also consider extending ministers’ powers in relation to the overriding public interest test. Finally, we will consider nature conservation order powers as well. At present, they apply only to land and not to parts of the sea or internal waters. We will review those powers to determine whether they should be widened.”

While Mr Lochhead’s reference related specifically to Conservation (Natural Habitats, &c) Regulations 1994 as ammended, we feel that subsequent legislation should also be considered such as, but not limited to, the Marine (Scotland) Act 2010.

Finally to ensure that stakeholders of Scottish Trust Ports and specifically those of the Cromarty Firth Port Authority, have the power to hold such bodies to account – whether by means of a Scottish Government appointed independent arbiter to help resolve disputes or other such means as determined by parliament. Currently the only recourse for aggrieved stakeholders after raising an issue with the Port board is legal action which immediately disadvantages communities and other stakeholders without the finances to be able to take this forward.“

Cromarty Rising and friends will be lobbying the parliament in person on Thursday 12th January, a bus will leave Nairn to attend the demonstration. To book a seat send a DM via the Cromarty Rising Facebook page. 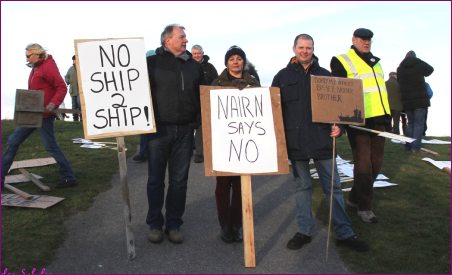