Could seriously be a goer and a big boost to the local economy and employment really is what this observer took from the presentation yesterday in the Nairn Community and Arts Centre by consultants, Upper Quartile. The research was financed by HIE.

If time permits we will publish a few extracts from the report over the weekend. Anyone that wants to get up to speed with the Lido proposal may wish to watch this short video.

At the presentation and taking a break from gettting a suntan on the doorsteps were three of the candidates in the mix for the Nairn and Cawdor ward seats on Highland Council. Ritchie Cunningham, Liz MacDonald and Tom Heggie below holding their copies of the final report.

Below a wee bittie from the report - the SWOT analysis which gives you the flavour - click on it to enlarge. If time permits then more later towards the weekend. Day job interfering with output just now and and a couple of pints with two members of River CC last night intervened too. 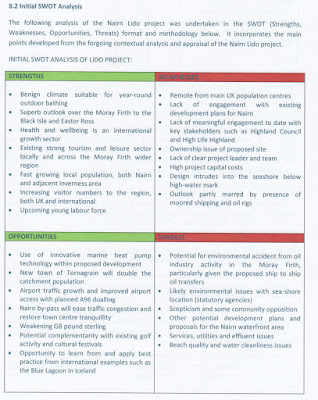