The art of picking up dog poo - should the local authority listen to the young as well? 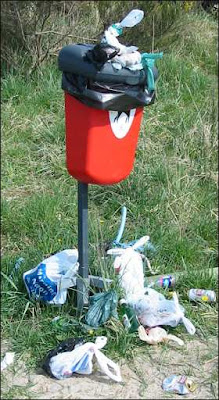 Regular readers will remember the recent Gurn articles concerning dog poo and the young folk who have approached this subject in a diplomatic, non-confrontational way. Well, is it time the local authority played its part more effectively? This is the scene down at the East Beach today and its not only the dog poo bins that are overflowing in that area. Time for someone to get out of a highly paid seat in an office and put on a pair of strong rubber gloves?

And there’s no point in anyone in officialdom blaming the Bank Holiday as there is a green wheelie bin which has been full since Friday situated at the recently re-vamped, but not quite re-white lined, car park at the Maggot.

On the subject of dog poo, why isn’t there the same outcry over all the smashed bottles (predominately Buckfast?) which litter footpaths and grassy areas? All this broken glass is not only dangerous to humans, but also to dogs and other animals. How many cyclists have had punctured tyres as a result of someone’s wanton vandalism?

Maybe it’s time we all started highlighting problem areas with some emulsion! Then, perhaps, something would get done as at least the Council could not say they didn’t know where there were problems.