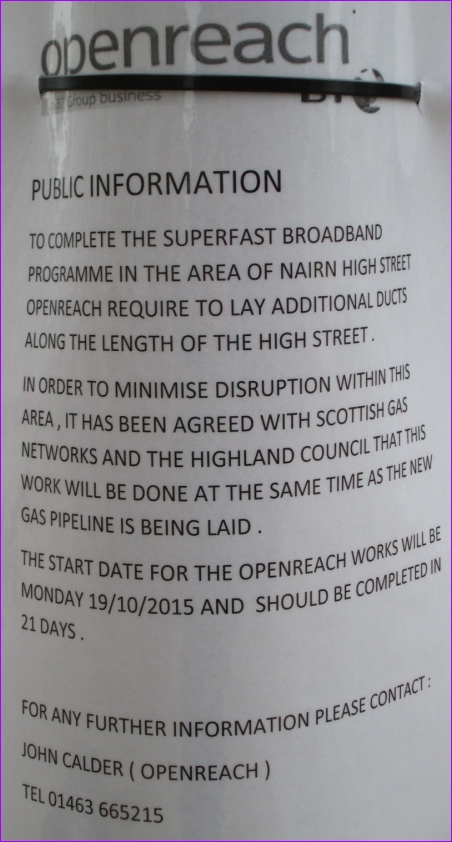 So February 2020 when everything on the high street is finished.

On a more positive note its great to see two utility companies co-ordinating to minimise disruption while carrying out these essential works
:-)

Just wait the water board will come in after everything done and dig it up again. LOL

Well said 7.11
More positive mental attitude might be good for our wee Burgh and County

and the new road will be left with track lines,the road should be re instaed to original condition like it was before work started,not looking like a damn minefield
w.mckechnie

Agree 7:11 and 8:35. Lets wait and see before making so many negative comments!

That explains the comments made in a High Street Business this afternoon as to why the road outside had already been dug up, re-instated and then dug up again! Open reach requiring the road to be dug up for their purposes after the SGB. Could this not have been avoided?

Ha ha. When I asked a workman on the High St today he said everything was now getting dug up including the pavements.

Not many years since we had the High St makeover that is now being destroyed.

Reckon you'll need a 4x4 for the High St once they've finished digging it up.

Terrible, and I feel sorry for shopkeepers as the place was deserted when I was there at lunchtime.

It'll all have to go back as good as new Anon.

I'm no fan of BT but the negative comments on here are depressing. There have been complaints that the centre of the town does not have access to decent broadband speeds. The fact that Openreach proposes to address this, whilst at the same time working with a utility company to minimise disruption should be welcomed, not derided.

Sorry to further depress you said...

I too am not a great fan of BT but I think with good reason, and the negative comments on this thread are only depressing in so much as they reflect people's poor opinion of the company

Depending on when High St broadband users get connected to fibre it will be some two years after the rest of Nairn. Anyone with an ounce of sense would have seen that the majority of business users who would benefit from fibre are on the High St. BT failed to address this despite questions being asked at the time

Hundreds of thousands of pounds have been given to BT from the public purse for fibre including the Scottish and UK governments, Broadband Delivery UK (BDUK), Highlands and Islands Enterprise (HIE). This is not a charitable act by BT but a very profitable one especially as they are increasing prices this autumn

BT have a near monopoly in providing the broadband infrastructure in the Highlands. This means that no matter which ISP you choose to sign up with BT will be providing the backbone, and lack of competition means they can name their price

BT derided? I haven't even started yet

In the interests of balance I want to say thank you to BT for taking an interest in providing broadband to Nairn. If you are a near monopoly I suspect it is because no one else has the slightest interest in investing in the low population areas of the highlands. If you have been awarded funds from BDUK it would have surely been signed off by our elected representatives. I am sure that you would have provided super fast broadband to the town centre earlier if it had not required you to dig up the High Street which was always going to be popular. Finally I say thank you for providing high tech jobs for highland folk. Please ignore the moaners as they are an irritating minority.

Maybe you own shares in BT or work for them?

BT took an 'interest' in providing fibre broadband because public bodies paid them a lot of our money to do so, it wasn't out of some sort of benevolent interest

Fibre wasn't provided to Nairn High St as it involved providing a 'box' at the exchange, nothing to do with digging up pavements even though as you say that might have proved 'popular'?

It's good to talk when there's money involved

Oh Well three years and a few months later here it comes to the High Street - here's a quick flashback:

Superfast broadband event in Nairn - but none for most of the High Street yet!
The Gurn had heard rumours that parts of the High Street area and the business park are not yet connected up to receive superfast broadbrand and this is confirmed by a statement on the ANB site, part of which reads:
"It is a great boost for Nairn to be chosen as the first in Scotland to be upgraded to the next generation of broadband though, unfortunately, it only covers about 90% of the town. Remarkably the areas not being upgraded in this first stage include most of the High Street and the Business Park. Perhaps someone from BT attending the event will be able to explain the rather bizarre logic behind that decision."

The event looks very interesting however and you will be able to get lots of advice on broadband and IT issues (including security) on Wednesday the 22nd of August in the Community Centre. More details on the ANB site
Posted by Graisg at 11:18 PM

I've been fighting for 'superfast' up Lochloy road and Kingsteps, even writing to local MP for over 2 years now! However, the infamous cabinet 13 is yet to serve these areas, despite the building of over 300 new houses at Meadow Leas. One would have thought that ‘they’ would put in the infrastructure beforehand, yet it has not and surely it would reduce costs, since the roads will again have to be dug up.

So people, if you live up that end of Nairn why not go to digital Scotland and email them asking when Nairn’s cabinet 13 is to be upgraded

Deployment in this exchange is being managed by Highlands and Islands Enterprise, for more information go to www.hie.co.uk/digital or send an email to hidigital@hient.co.uk. Source; http://www.digitalscotland.org/whereandwhen

Fibre to box is very short sited with regard to future proofing. Fibre to premise already allows for speeds of 300Mbps and over.