Up and coming Nairn junior Squash player, Harry Barron, entered the Boys Under 15 Technifibre British Junior Squash Championships in Manchester recently with Alasdair Prott of Inverness. This competition is one of the premier Tournaments of the England squash calendar and is an important step up in performance for Harry. As he was not on the England Squash ranking system he was placed in the qualifying draw which required him to win both his qualifying matches to progress to the final 16 of the draw. 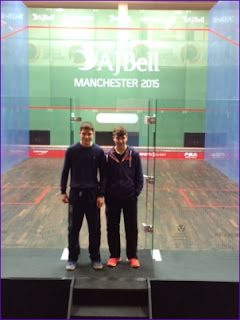 His first opponent in the qualifying draw withdrew so Harry went forward to play Harry Little of Northumbria. A fired up Barron won a tight match 3-0 which put him through to final 16.

His next opponent was Harry Anderson who was ranked No 6 in England. The match was a long, gruelling tight fought affair which Harry, being un-seeded, was not expected to win. However, Barron had not read the script and, after 45 mins, won the match 3-2 (12-10, 8-11, 11-8, 6-11, 11-7). This was a tremendous effort on his part and gave him increased confidence for the quarter finals.

His next opponent was Louie Martin from Sussex. In the first game Harry was leading 6-0 when he received an injured hamstring during a clash with his opponent during a rally. This, unfortunately, adversely affected his game and he lost 3-1. The injury affected him for the rest of the weekend so that he won one and lost two of his remaining matches. His final position in the Tournament was 14th which he found a disappointment after his earlier performance. However, he has gained a wealth of experience from his first visit to a high level tournament, next year may be a different matter. One of the reasons for his spectacular rise up the rankings has to be due to the expert coaching of Malcolm and Garry McKay plus the fact that he is also in the Scottish Squash Highland squad who train every Friday in Inverness.

Al Prott from Inverness was seeded 2nd and went through to the final without dropping a game in any of his matches, however, he met Jared Carter, the English No 1, and lost 3-0 in the final

It’s great to see Highland Junior Squash players performing at a high level in national competitions and is a real incentive to our large group of young players. Watch this space.
Posted by Graisg at 7:50 AM