The temporary traffic lights at the top of Harbour Street have certainly had an effect today with the town's traffic flow and many tempers going into meltdown. One of our readers tells us:

Another observer tells us too that around midday there were already tailbacks past the Ardersier turn off. The Facebook group "Remove Nairn Traffic Lights" is complaint central today. Warnings too that the unofficial Auldearn-Cawdor bypass is very busy. There is debate on the traffic lights group page about why the work had to be done at the height of Nairn's tourist season. More here

Interesting article and comment on the Highland News site this evening too:

Nairn community councillor Rosemary Young was caught up in the traffic jam and livid.

"It’s a standstill. An absolute standstill. Horrendous," she said. "I have never seen anything like this. They’ve put this town in shambles." More here.

Meanwhile it looks like the delays are so horrendous the authorities have to take action:

The Website states: "The two-way temporary traffic lights which have been in place today on the A96, at the junction of Harbour Street with High Street, Bridge Street and St. Ninian Road, will be taken down this evening. We will complete this section of work at a later date and will provide a further update once revised plans have been finalised."

And it looks like there has been an impact on the World Orienteering Championships too, BBC Alba's Hugh Dan has commented on twitter - probably on his way to try and commentate on the orienteering.

And at five o' clock a certain amount of normality had returned as the traffic lights had duly been taken away but there was still no access to Harbour Street. 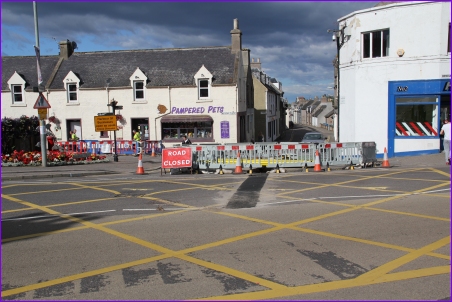 Good to see that sanity prevails and the lights have been taken down to be seen at a very later date hopefully. I got caught out at Delnies caravan site and managed to turn into the single track road and get through at Kildrummie with no problems at all. My daughter however got caught and it took her an hour to get through Nairn.

The replacement of gas mains has to be done sometime. But it's just plain stupid to schedule the work in such a way that the A96 has to be blocked and dug up over a peak summer weekend holiday period. It's a pity they couldn't do this critical piece of work, across the A96, as a night-time job over a less-busy weekend.

It is perhaps too much to expect SGN (gas networks) and BEAR Scotland (road contractors) to think very carefully about the local economy, business, tourism and the interests of the community.

But Highland Council knew it was a long bank holiday weekend. They knew the date of the Nairn Show. They knew - and helped to promote - the Orienteering Championships, which depend on good and efficient access between Inverness, Forres and Nairn this week.

The Council are the LOCAL authority. They are supposed to plan, coordinate and manage work such as this to minimise disruption and damage to local interests. Why didn't they consider this properly and insist that the pipelaying was done outside peak summer season? Indeed why didn't they insist that this work (which must have been budgeted and planned for well in advance) was done when the roads were restricted and dug up for the re-laying of the High Street pavements?

Forward planning? Joined-up thinking? Effective organisation? The Council is not fit for purpose. Heads should roll. Time for a serious purge and reform to make the local authority locally accountable.

I have heard it suggested that what it comes to this sort of thing with gas mains then the Highland Council has very little power to suggest anything but it would be helpful if someone from the Council could make their powers or lack of them in this situation clear because reading comments on social media it seems that many people are pointing the finger at them.

Now what basis did those discussions take place on? Were Bear and Highland Council merely consulted on this or did they have the power to insist. No doubt our local members of the Council might have more information? Were the World Orienteering Championships or anything else of local significance mentioned?