Developers being allowed to build too many larger size up-market homes in Nairn? Young, single folk being ignored?

Readers may be interested in a couple of slides show at a presentation in the Community Centre last Friday by the Community Councils and other groups to the new Highland Council Chief Executive Donna Manson. Readers can view the complete presentation here. 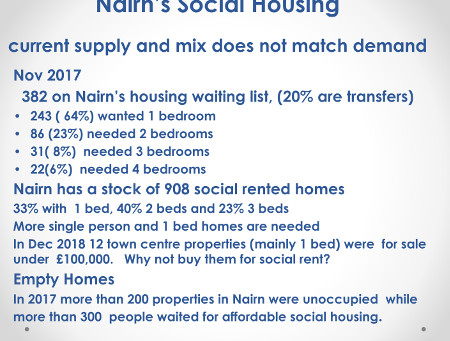 So there is the assertion that the Highland Council Development plan housing projections are heavily overestimated. However, let us concern ourselves here with the figures on the Housing waiting list. A remarkable 64% of the folk on that list want one-bedroom accommodation.  We would suspect that the majority of them are young people wanting to get their first home perhaps? It shows that we are not catering adequately for a large section of the population. Just look at the homes being built up at Lochloy - it doesn't look like there's 64% of single accommodation being built up there does it?

Nairn obviously needs more of this type of housing. Should planners be doing more to ensure private developers reflect this or does it have to be left almost entirely to the public sector and if so how can we get going on that quickly in Nairn?

Recently the Highland Housing Alliance showed an interest in Sandown.  The problem here is that, although part of the Sandown field is zoned for housing as a result of a charrette plan gathering dust on a shelf in the Courthouse somewhere (a quicker start to housing on Sandown had been envisaged back in 2012), the Highland Council has a toxic history with the community over its administration of the Common Good Land that is Sandown. The Council also has an interest in the HHA and is also the planning authority - the overlapping interests there have the potential once again to raise public concern. Another argument for putting the Common Good Fund back where it belongs under the control of the people of Nairn, rather than Highland Council?

Anyway, Drew Hendry praised the HHA the other day, here's a short video he put on twitter.

📽️WATCH: @scotgov's housing initiatives are delivering for our communities & a particular favorite of mine is the @HighlandHousing mid-market rent scheme, because it gives young people in the Highlands housing security as they save for a deposit, and a home they can buy in 5 yrs. pic.twitter.com/7DrA910R7Q
— Drew Hendry MP (@drewhendrySNP) 14 December 2018

More about the Highland Housing Alliance here. Looking towards 2019 however, would the  most effective answer be for Nairn to have its own Housing Association and get building on Sandown for those in our community most in need of housing, 64% of whom need single-person's accommodation? We wouldn't be at the mercy of what Highland Council and developers want that way - the community could decide what is best. An impossible dream or something that should be possible in this new era of community empowerment and localism (let's hope too that 2019 is the year that these concepts finally hit town)?
Posted by Graisg at 8:02 AM