Information Board in Castle Lane Square - has anybody seen the key?

The informationless board in Castle Lane Sq is now into its 4th month without information since its installation earlier this year. The first Gurn report on this topic was published in early October.  In November we reported on how River Community Council had agreed to a Highland Council request to take over the administration of the board. Since then Chairman of River CC, Tommy Hogg, has tried his best to gain access to the board and tells the Gurn that he has a thick pile of notices to go in. Unfortunately there is no key to the board available from Highland Council.

Tommy told his colleagues at their regular meeting in the URC hall tonight that he had received an e-mail from Highland Council telling him that the key had apparently become detatched at the time of delivery. It isn't just any old key however, it is a special type. In the Courthouse they don't know who made the information board and are to investigate with the TECS department so once the manufacturer is identified they can order a new key. Perhaps anyone out there who knows who made the information board could phone up the Courthouse and save a bit of time here. It'll all be over by Christmas? 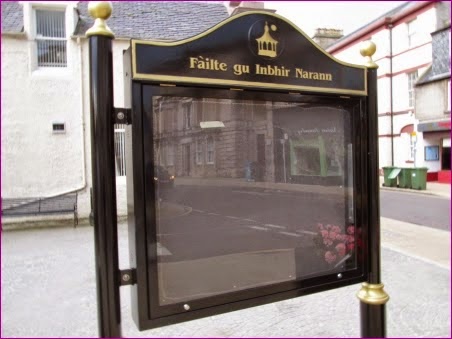 surely the council should know who they paid to make the board,unless it was a homer,and paid for on the side,and the rest of the cash squandered

My my what ever happened to organisation ,safe keeping, and a useful logged papertrail on the matter. Professional handling is a miss for Nairn in regards to the extra resources being used so far to fill up this empty noticeboard.

Is this the same Highland Council that will shortly be implementing an "investment strategy" for the Nairn Common Good Fund?

Maybe someone could tape a notice onto the board asking is anyone has seen the key?

Ya really couldn't make this up!

Maybe it fell in to the concrete? is it still wet?

Better still they should of fitted the key with a gprs device signal first. Or if that was too technical a whistle key ring would be handy

First time I've heard of a notice board lock in

You could not make this up! - The Highland Council is rapidly descending into the script for a Brian Rix farce!!!

Who needs cuts? it looks like the system is already broken. We pay lots of money to officials and councillors too and they can't even find a way to open a noticeboard.

this sounds like a joke. are they for real? it makes you wonder who is running HC? perhaps its a game of hide and seek. is this for the kids at xmas. see which one can find the key.

Maybe it was put in the same envelope as the letter to Parkdean informing them of their rates increase?

Councillor Green has it , well he has all the rest of the council in his pocket

If only anon :-) Michael Green is of course in opposition and has very little influence just now in the bigger scheme of things.

Doesn't really matter anyways...looks like the lettering is all in gobbledygook and nobody will understand it!

Nothing wrong with a bit of Garlick

And another cut to be made.
It looks like they will have to cut it open Thenagain can they afford to do that and get another key???

Is Nairn trying for an award to have the silliest council in Scotland?or have they already got that?