Requests for Highland Council to fly Courthouse Saltire at half mast to show respect for Ronnie Watson's service to Nairn.

Considerable momentum is building out in Nairn social media circles for the Courthouse flag to be lowered to half-mast to show the community's respect for former Provost Ronnie Watson  and his service to the town. The Gurn understands that there have also been phone calls made to Highland Council. More on Nairn when you were a bairn facebook page and also on twitter. 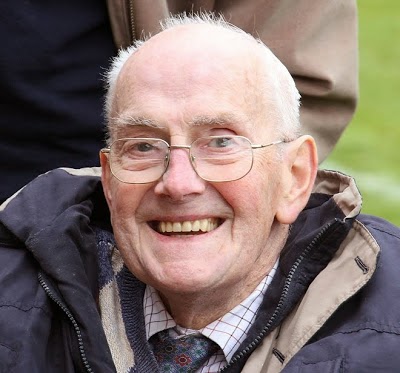 Picture above of Ronnie through in Banff on May 14th 2011 when County fan Ronnie saw the Highland League Cup (the Morganti Cup) come home when Nairn County beat Fraserburgh in the final of that competition.

UPDATE 14.10: Received an e-mail response from Liz who tells the Gurn:

"I have requested the flag be lowered to Convenor Jimmy Gray, and hope it will be able to do. Ronnie had received the Freedom of Nairn a few years ago and I really think he deserves this show of respect."

UPDATE: 19.36 The Gurn understands that Provost Laurie Fraser personally lowered the flag late this afternoon after returning from council meetings. It will remain at half mast until approx 4pm tomorrow when the council workers will reinstate it.
Posted by Graisg at 11:43 AM