Could it be double success for the local SNP next Thursday?

With all the General Election media coverage it might have escaped some voters notice that there is also a Highland Council byelection in Ward 19 Nairn on the same day next week.

In the Inverness Nairn, Badenoch and Strathspey Westminster constituency it seems like it is now a two horse race between Drew Hendry of the SNP and Danny Alexander of the LibDems - the bookies have Drew as the favourite and opinion polls point to the same outcome too but Danny is out there working hard and there is only one poll that matters on the day. If Drew takes it however will the SNP surge also be reflected in the other contest on the same day?

Will the SNP's Stephen Fuller come top of the ballot on the day to make it a double for the local SNP? There is a strong tradition of candidates standing as "Independents" in Nairn  but that potential challenge is split as this contest sees two hopefuls without a political designation. There are also Labour and LibDem candidates - details of the five Council byelection candidates  here and links to election literature we have received.  How will it pan out next week? There's not long to find out. 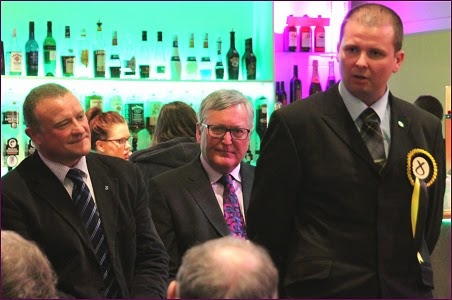 In the picture above the SNP's byelection candidate, Stephen Fuller, speaking recently at a public meeting in the Playhouse - on the  left of the picture the SNP Westminster candidate Drew Hendry and, in the middle, Fergus Ewing, the local MSP  and Minister for Business, Energy and Tourism.