Symon Macintyre, Artistic Director of Edinburgh-based visual theatre company, Vision Mechanics, has a reputation for staging innovative productions in unconventional spaces. This summer, his new production, Drift, takes place on some of Scotland’s most beautiful beaches including in Symon’s home town of Nairn. Drift is supported by Creative Scotland and the Nairn performances have been made possible through the support of Davidson (Nairn) Charitable Trust.

Drift is inspired by the true story of Shetland crofter Betty Mouat, who in January 1886, aged 61, was the only passenger on the coastal cutter Columbine 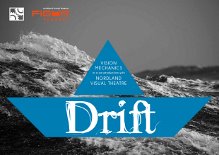 which left Grutness bound for Lerwick. Shortly after setting sail a storm washed the captain and crew overboard and Miss Mouat was presumed lost at sea. More than a week later the Columbine grounded on Lepsoy in Norway. To everyone’s amazement, Miss Mouat had survived. She returned to Shetland to live in her croft for another 30 years, a folk hero celebrated in her local community.

Drift has been the combined effort of an impressive team of collaborators with libretto & script written by playwright Judith Adams, music by Eddie McGuire, vocals by Gerda Stevenson and visual artists including Kim Bergsagel and rust painter Tony Reason designing and building the Drift installations pieces which depict Betty’s journey at sea.
Symon says “The audience experience Drift wearing individual headphones. Like archaeologists ,they walk through our installation, discovering images and objects which uncover the thoughts and feelings of Betty Mouat, abandoned and drifting alone at sea.”

Drift will take place on Nairn Beach (near the harbour) from 3-5 July inclusive, followed by performances on Scotland’s most northerly beach, Skaw Beach in Unst, Shetland Islands from 10-13 July. The production can then be seen in Aberdeenshire, at St Cyrus Bay from 23-26 July.

The performance lasts 40 minutes. Admits one person every 5 minutes. No pre booking is required and entry is by donation. The production is not suitable for young children.

Drift is a co-production with Nordland Visual Theatre, Stamsund and will tour to Norwegian beaches in summer 2016.
Posted by Graisg at 3:39 PM

Any idea what time?

'The performance lasts 40 minutes. Admits one person every 5 minutes'.

So if you're number 7 in the queue you only get five minutes of the show? Weird

@5:53 PM
I haven't seen the show so maybe being last and only subjected to five minutes is the best seat you can hope for!