Below is a copy of a letter from Fergus Ewing to constituents who have raised their concerns about Ship to Ship oil transfers proposed for the Moray Firth. I'm hearing severe disappointment with this letter from some of those who have been campaigning against the proposal.

There is a lack of understanding as to why the Scottish Government are reluctant to take a position on this issue - they have been known to take a position on issues not within their control haven't they? And surely they should take a stance on an issue that concerns the Moray Firth environment? Even more so when you consider that local SNP councillor Liz MacDonald's motion to the party conference in the spring against S2S in the Moray Firth was passed unanimously.

Click on the images to enlarge and a PDF format of the letter is available here. 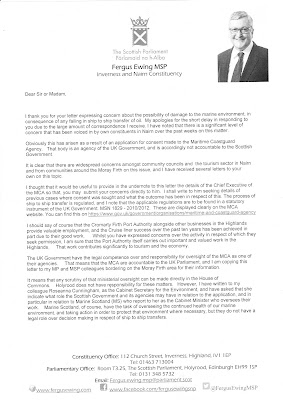 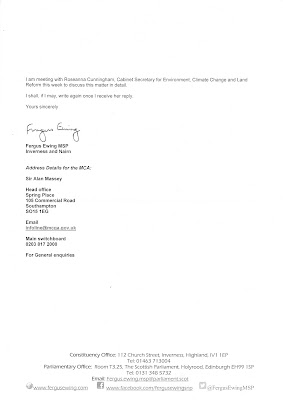 There are some people out there who will take any opportunity for an SNP BAD moment and, I'm afraid, Mr Ewing has handed them one on a plate with this. Saying it's a devolved issue doesn't cut it, unless there is something else going on?

With regards to his comment about Marine Scotland not having a legal role perhaps he should inform Mr Buskie, CEO of Port of Cromarty Firth who seems to think that they, Marine Scotland, are a statutory authority and were consultees.

Some interesting reading for over the Christmas here, http://www.cromartyrising.com/2016/12/19/oil-leak-20-the-naysers-respond/

Come on Mr Ewing, time to get off that fence.

Ewing gave £4M to the CFPA in 2014, in my opionion he's not on a fence, he's supporting his pals and along with Liz is going a fine job of p****** off SNP supporters in Nairn

Historically the SNP were know as the 'Tartan Tories'. We now have Fergus Ewing supporting the Cromarty Firth Port Authority (business over community) and recently we heard Drew Hendry voice support for the Heathrow airport expansion. I'm beginning to wonder if Tartan Tories is becoming a current term for the SNP? My support for them is certainly now in question

Mr Ewing states that the CFPA authority provide jobs and contribute to the economy, I'm sure that is all he's concerned about

All the other issues that we've raised with him to date he's effectively ignored by telling us to write to other people. There's no way he wants either himself or the Scottish government to be seen to support those who object to the proposed oil transfers.

This sounds like an ideal opportunity for other political parties to become involved. John Finnie (Scottish Greens) was the only MSP to attend the protest on Nairn beach but I'm pretty sure David Stewart might also wish to support constituents rather than fob them off

Shameful attitude and behaviour from Fergus Ewing towards people, I hope he realises the damage he's causing

The SNP jury is still out on fracking, or is it?

HIE is funded by the Scottish Government's Enterprise, Energy and Tourism Directorate. I believe Mr Ewing is an 'energy' person?

Must have missed the SNP Bad Conspiracy:
Has the "SNP-controlled" SEPA not objected?
Has the "SNP-controlled" SNH not objected?
Did the whole SNP Conference not oppose?
Aren't our 2 local SNP Councillors 100% opposed?
Isn't our SNP MP, Drew Hendry opposed?
Isn't the local SNP Councillor in Cromarty one of the first opposers?
I agree that it is great to have John Finnie's support - but it would be very curious if any Green Party member could thole STS. Fergus our MSP could and should and might yet be much more supportive.
However ..... opportunistic waffle from Tories, Liberal-ites and Labour-ites et al - gies a brek!

"Responding to Mr Finnie’s request to support the growing opposition to ship to ship transfer on the open seas, Councillor Maxine Smith, Leader of the SNP Group on the Highland Council, who represents the Cromarty Firth Ward, advised Mr Finnie that the application had the support of the SNP Scottish Government and that she had “no concerns at this time” regarding the application."

Maxine might have said so, a year ago because her local Port Authority and even her local Community Council support STS. But - what do the Scottish Governement say?
" ...... we remain vigilant to the need for careful consideration in environmentally sensitive waters to ensure the highest standards of protection for our marine environment."
So let's just keep greater pressure on Fergus from this side of the argument than the support he apparently receives from Invergordon.

And what about the other MSP's for the area, has anyone heard a peep from Labour's Dave Stewart and the Tory, Sir Edward Mountain? Least John Finnie has put his head about the parapet.

Another one for Better Together folk to ponder then?

Nothing from the Tory mannie