STS oil transfers in the Moray Firth - a day for democracy at Highland Council meeting tomorrow?

Tomorrow Highland Council may find a mechanism to bring the ship to ship oil transfers to full and open debate at the Council. The submission that they put into the process when the first Cromarty Firth Port Authority application went in has been heavily criticised by campaigners and community councils around the Moray Firth. Many thought it was so weak it was more or less a green light to the application.

Tomorrow Highland Council has a chance to redeem itself and give this topic the full and open debate that it demands and deserves and that over 500 people stood on Nairn Central Beach for on Sunday (pictures here). And then there are the thousands that have signed petitions and written letters.

The response to a written question from the Black Isle Councillor Craig Fraser is not encouraging. It amounts to the official Highland Council position but it was probably written before the demonstration on Sunday.

"To the Chair of the Planning, Development & Infrastructure Committee “Will you take the necessary action to ensure that arrangements are made/time allocated/an adequate opportunity is provided for the Council to consider in formal Committee the revised/amended STS oil transfer licence application, which PoCF has reportedly stated will be submitted "early in the New Year"; and to make provision for elected Councillors to review and comment on the Highland Council's updated formal representations on that revised application before they are submitted?” 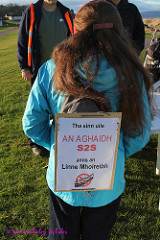 If it doesn't go to the full Council for debate then the decision will be left basically to officials because last time we saw little or no input from councillors - it will just be more of the same. Leaving so much power on this issue in the hands of officials is simply not the right thing to do - that is not democracy! Many feel that nothing less than a full council debate on this in an open and transparent manner will do. Tomorrow Highland Council has a choice. Ironically the first topic for debate is the Commission on Highland Democracy. Tomorrow Councillors have a chance to demonstrate that democracy exists in the Highlands.

" If it doesn't go to the full Council for debate then the decision will be left basically to officials..." and we saw how well that's gone so far.