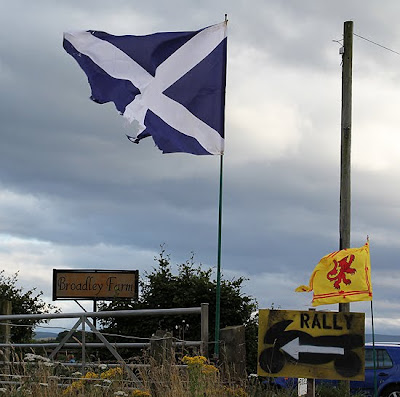 What happend to the box if we found something that was boring(right to vote ?)It seem's a bit unfair to put interesting or very interesting when it is not ?.Does the person writing the blogs find it disheartening if someone finds something boring that they have written about ? Thank's...

Yeah someone else who wants the boring vote back!!!

Nothing boring about looking at the two flags that represent Scotland.
Unless you are from an alien Country.
But I think they are something for me as a Scotsman to be proud off thanks for punting them up on the blog

er... Nairnguy I suspect the 'boring' box disappeared in an effort to thwart the idiot who passed(es) his or her time by constantly ticking the box - presumably for their own amusement??? Hilarious.

See the post earlier this month entitled "interesting".
Again a full refund for anyone that can no longer tick the boring box. Interesting is the new boring now ;-)

@ Jacobite you are welcome. I don't think many here are bored by saltires by the way, there's just one or two that want boring back in the reaction boxes :-)

To the jacobite maybe i used the wrong post to ask a question(which in my opinion was not really a great answer back "interesting is the new boring").It make's the blog very one sided.If i personally find something interesting OR as it is now with such excitement i would tick the appropriate box but in my own opinion found something really was boring to me i would tick the boring box.Not to hard to understand is it ????.Why not put it to a poll to settle it ?

nairnguy, if you're not happy with not having a boring box, why not start your own blog or website, write some of your own stuff and have your own boring box? There have been hints in past Gurn postings that there seems to have been some abuse of the 'boring' box and this is why it has been removed.

To mr anonymous is it not a bit harsh and child'ish to ask me to start my own blog ? After all this is the gurn and im having a gurn..
Quote from mr anonymous " There have been hints in past Gurn postings that there seems to have been some abuse of the 'boring' box and this is why it has been removed".
Is it abuse or people being honest ??

Ah, now I can see what the problem REALLY is.

1) The Gurn is disappointed that someone regularly clicks on ALL the BORING boxes, without ever explaining their problem, so he removes the BORING box.

2) Nairnguy misses clicking on the BORING box, so he posts a message instead. True, his message only said 'Where's my BORING box?' but it's a start at communication.

3) I'm not blaming Nairnguy for doing what he's always (presumably) done, but I think I prefer a detailed criticism of events or actions. It's much more interesting for the rest of us.

4) Nairnguy, did you set out to click the BORING box on this item which refers to the Bikers Rally? Does that mean you find bikers to be boring, OR bikers' rallies boring, OR are you criticising the agricultural activities at Broadley Farm?

OK, farming IS boring unless you're a farmer. But life is full of things like that. I wouldn't despair of agriculture just because it's too technical for me!

What's wrong with telling the rest of us what you don't like about the matter?

james you have me so so wrong but you may have your own opinion i guess.All i have done is ask a question about a a box that we could tick if we found something boring..Yes ?..You seem to have analysed my original question(must have a lot of time on your hands) and come up with your own answers to your own question.Mine would be
1=NO
2=NO
3=NO
4=NO
As i said before (maybe if you read it ?)Maybe i used the wrong post to ask a simple question but never did get a simple answer back.

Nairn Guy's simple question was what happened to the boring box? The reply from Graisg to his simple question (maybe if he reads it) says that interesting is the new boring. What's not simple about that?

It made as much sense as you asking that question "simples".This site must be run by politions ! Cant get a straight answer.Maybe that's why it take's years for anything to get done in nairn,ie new supermarket,The walls to the regal get a lick of paint...ect ect mmmmm how sad !.Take it nairn getting fiberoptic broadband is to get us up to 2011 instead of living in the past !.

this thread now closed, thanks to all contributors