Some voices have been raised against another charity shop coming to Nairn. The Red Cross will be moving into the prominent former DE Shoe shop soon. As great changes still continue in the way we buy goods and services and with some experts saying that communities should look "beyond retail" for empty shop solutions, perhaps we should be thankful that another charity wishes to have a go on Nairn High Street. Charity shops can benefit communities in more ways than you might think - with this in mind we repost an article that was written at the beginning of this year.


A local weekly newspaper in its review of the year used the phrase “High Street in crisis”. Nairn High Street certainly took a few knocks in 2013. One element of the local retail economy that remains strong however is the Charity Shop sector. A report by the think tank Demos states that there are now 900 charity shops in Scotland, raising £26 million for charity annually.
Some people see the presence of charity shops in the High Street as evidence of a spiral of decline but that analysis will have to be revisited according to Demos: 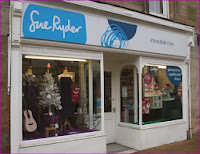 “Because of their increasing presence on the high street, as well as the social and economic benefits they provide, charity shops should be a key voice in the regeneration debate. Dramatic changes to the retail sector brought about through the internet and technology mean we can never return to the high streets of old. Instead, local authorities need to envisage a new role  and function for local high streets, which includes a more creative mixture of housing, education, arts, retail and, importantly, services.”

The report is a fascinating (but long) read which this observer is still browsing, it details the economic benefits of these shops; the massive volume of goods that are reused/recycled rather than going to landfill; the social and health benefits of volunteering to work in the shops etc, etc. Maybe Nairn could do with more charity shops to fill the empty premises on the High Street? All food for thought perhaps for the Highland Council/NICE town centre charrette that we will hear more about very soon?

The report states the considerable benefits but is possible to hear negative comment towards charity shops, particularly grumbles about the pricing of some articles in charity shops: some feel that they are still good value but others have a wide range of complaints about the shops which for some includes their displeasure at the perceived large salaries that are given to the high heid yins of some charities. A recent Guardian article had the headline: “'Greedy' charity shops under fire for prices beyond means of poor” and can be read here.

Nairn High Street may be in crisis but as we move into the first few days of 2014 the Charity Shops are still with us and, love them or loathe them, they will obviously remain a permanent fixture on our High Street.
Posted by Graisg at 7:22 AM

well one I use isnt a benefit,its getting more expensive than a regular store. I believe everything they get in gets checked out on ebay to see how much they can charge, nevermind that theres p&p and other charges on ebay that drive the prices up

Pray tell me? Would I be right in thinking that all income generated
by charity shops is not directed 100%
to actual charities.

I recall someone telling me otherwise. Anyone know??

Shop owners face a pretty gloomy future as they see the rental and property values of their properties fall to the point whereby they'll know they'll never again be retail premises. Not all are suitable for conversion to residential premises either, many tend to be long and relatively narrow, and only have windows/access at the front of the building. There are some uncertainties in 2014, but further shops closing on our High St is unfortunately not one

"charity shops should be a key voice in the regeneration debate". I have not read the report and hope to do so, but this defies logic. Perhaps every shop should engage the services of volunteers - except it's against the law to do so in a real shop. Any rise in charity shops is an indicator that the local economy is bust. We need real jobs in real businesses if we want this community to thrive.

I also deeply object to the fact that charity shops increasingly sell new products. They compete with and undercut real shops that have to pay staff and all the other costs of running a shop. Something doesn't add up.

Saying the community benefits isn't the whole truth. Individuals may benefit in difficult times, but the community as a viable entity can only suffer in the long run.

@ "pb" as a former employee of one of thesee organizations, i can say that you are absolutely correct. Have worked in both depot and storefront and we are told to check the price of every item on the internet, regardless of its condition. Would advise you to spend your money else where.

Why do we have charities? General consensus is that they provide a useful service for groups’ outwith those supported totally by government or private funding. We as the public can choose to support ‘a’ charity by buying from a charity shop or donating cash.
An alternative to charities might be for the government to provide more funding but that would mean we the public would have less say about which ones we support
Charities are diverse. Incredibly the RNLI is still a charity and dependent on donations
Charity shops used to be a place where you could pick up a real bargain but as mentioned have become quite savvy as to the value of the goods they sell, although bargains are still to be had. I don’t think this is wrong, they are literally competing on the High Street for our monies, and yes that does mean with other retailers
Are charity shops a sign of economic decline on our High Street, yes, High Streets and retail shops are in demise throughout the UK with one or two exceptions. Surely it’s better to have a shop open as a charity one than just boarded up? At the end of the day you can always vote with your purse or write a comment to the Gurn

We should all be pleased that the DE shoe shop will be occupied. The High Street is not what it used to be, and never will be again. The good old days are gone and will not come back. Inverness has become too big and too close.

However, a High Street with empty shops is bad for all of us. Retailers and service providers are what we need. (There are exceptions, of course. For example, the Richmond Fellowship provides a service to its clients, but I wish it would provide that service somewhere else and not in that prime retail site.)

That yet another charity shop will open is less pleasing.

Some local charities do a good job and benefit our society. However, larger national ones? Doubtful.

The ‘charity’ sector is huge and supported by government – that is they use our money. Even if you are not a tax-payer, this affects you. They are in business after all, and compete, unfairly and directly, with those of us who are in real local businesses.
Can we use volunteers? No.
Are we exempt from rates and taxes? No.
Do we receive tax-subsidised salaries? No.

Very few larger charities, especially those that collect your money for foreign aid, are worthy of your support. Acquiring charitable status is no guarantee that a company is charitably motivated.

'Very few larger charities, especially those that collect your money for foreign aid, are worthy of your support. Acquiring charitable status is no guarantee that a company is charitably motivated.'

@anon 5.21 I wouldn't agree with the what anon 12.46 says but he/she is none the less entitled to an opinion. Perhaps they are motivated by the huge salaries that some charities pay to high heid yins for example?

However, It would be interesting to see if anon 12.46 will take up your offer of backing up their opinion.

I see that somebody disagrees with my opinion of 12.46. That is their privilege. Of course, many charities do good work. I do not question that, but if anybody thinks that all charity fund raising is motivated by pure altruism, I suggest they do some serious research before giving to some of the larger ones. I'll not name those which trouble me. Nor will I debate, as the subject is truly endless. However, here are the first 4 of a quick google search. It's only a start:
http://www.dailymail.co.uk/news/article-2550648/Fury-234-000-salary-boss-Save-Children-Charity-chiefs-huge-wages-reined-say-MPs.html