Laurie speaks to the Gurn on Parking charges, toilet charges, Christmas Lights and the need for a new Nairn Academy

Parents, alumni and some present day pupils made their way up to the frozen campus of Nairn Academy this morning for interviews with local media. Also present was Cllr Liz MacDonald, we'll post a wee interview with her later.  Laurie was willing to have a wee blether about some of the issues posed by the recent Highland Council budget vote and also on the pressing need for a rebuild of Nairn Academy.


The scene earlier this morning in Duncan Drive as concerned parents, former and present pupils gather to talk to MFR about the need for a new Nairn Academy to be built. 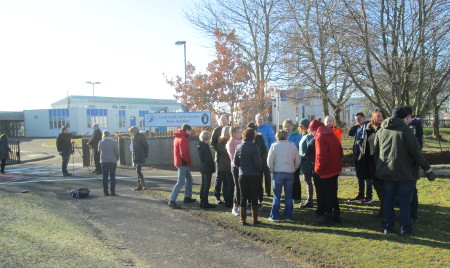 With reference to the toilets, isn't the cleaning of them outsourced at the moment? If so, when does the contract end? Would any compensation have to be paid to the cleaning company? How much costs are there for officials within Highland Council to administer the cleaning contract?

Down at the Links, the West beach and the harbour; the Links and Maggot car parks were full, throughout today there were hundreds of people of all ages out walking, if the toilets were closed where would they go? The toilets should not be looked on as an added bonus they should be treated the same way as any council building with a part time cleaner employed to clean them every day or make it part of a council employee's (or Highlife) job description. How does the Lollipop people's contracts work, couldn't someone be employed in a similar way? TIme to cut the overheads?

Apparently as part of the BID local businesses are going to be encouraged to let the public use their toilets. Great idea, may work on the High Street but one of the big problems is there are not many businesses in the Links or harbour area.

Where to pish said...

He voted for the budget cuts

To Anon @ 8:56PM
Re:- "Apparently as part of the BID local businesses are going to be encouraged to let the public use their toilets. Great idea,"

Even on the High Street most of the businesses do not have "public toilets" as they are for staff. Most are not disabled accessible, & most are in areas were stock is stored, so in "secure staff areas", & that is leaving aside the hygiene & general building state/decoration aspects to one side.

Bad idea from the BID if its true.