Momentum for YES in Nairn too?

This observer spoke to a friend who had gone from straight NO to YES over the weekend. Just one person but I hear of others too. In various parts of town more YES posters are going up including 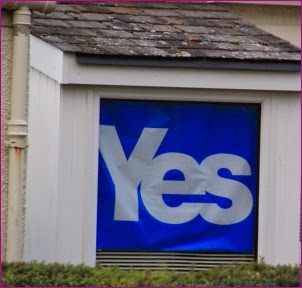 some rather large ones (see picture).

There is undoubtedly a swing towards YES in Scotland generally and from anecdotal evidence and the appearance of material in windows it looks like that process is under way locally too. It is easy to mistake a good reaction from the electorate for a winning one though and no doubt there will be plenty more activity locally up to and including September the 18th. It could be very tight but has the contest already been won in Nairn?
Posted by Graisg at 8:17 PM

Im so glad for all these flags and banners to help me decide what to vote for. But seriously, it has been obvious over the last year or so that yes voters are more vocal about it while no voters keep their decision to themselves. I seriously hope you are not so naive as to believe the tally of yes/no banners or posters represents the voting decision of Nairn? Or is this yet more yes propaganda?

It isn't so much anti britishness for me but anti Westminster clique and their obvious contempt for all the UK electorate. We have a chance to break free from them.

It's great to see so many people engaged with politics no matter what the outcome. Whatever the vote Westminster will never be the same and hopefully we'll see a positive result

Before anyone votes yes it might be wise to ask themselves how they will behave over the next couple of years (and more perhaps) whilst the uncertainties are negotiated. I for one would go into save mode to cover the chance of it impacting my job, house prices (to avoid getting trapped in negative equity) etc. The (possibly)short term impact if others did likewise would likely be very damaging on the local economy.

Yes in Nairn is the vociferous minority. The good sense of the Scottish people will give a resounding NO on the day.

let's hope that's not the better together's undoing. Perhaps in this last week no supporters should be more vocal.

Interesting edit. I think there are a number from rUK who (however much they like the area and the people) would seriously consider leaving Scotland if they vote yes.

Vote No and get something better?

Hmmm ... 35 years ago a former prime minister, a Scot and, as it happens, a Tory, Sir Alec Douglas Home urged his countrymen to vote No and get "something better". The referendum rejected devolution and what they got soon afterwards was 18 years of Margaret Thatcher's government and no devolution at all ... don`t trust them!!

Let's not kid ourselves said...

Whether we vote Yes or No, hard times are coming. So far the UK Government have only implemented 40% of their austerity cuts which means there are still 60% to come.
Surely it's better that we are in charge of our own destiny?

Shutting this thread folks, comments getting a bit silly now from both sides.