Not too long ago we had a bit of fun with this here on Gurn Nurn after Alex stated on the BBC's Question Time that he was considering standing for a Westminster seat at the General Election. Currently with polling evidence in Scotland and with what William Hill bookies have to say the seat of Inverness, Nairn, Badenoch and Strathspey is looking very much like it will fall to the SNP in May. A week is a long time in politics however and six months is an eternity but it seems that it will be very tough for Danny when the time comes.

The Daily Mail article looks all fluff just like the Gurn one really and the paper indicates that the Gordon seat might be Alex's choice if he does stand for Westminster.

Who knows though, it would certainly electrify the local General Election atmosphere if Alex did go for it here. He's no stranger to the area too as the image below and this one here testify. 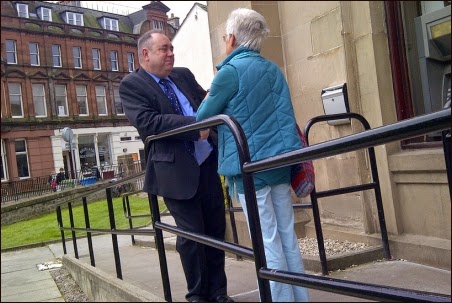 Image from Bratach
Posted by Graisg at 10:22 AM