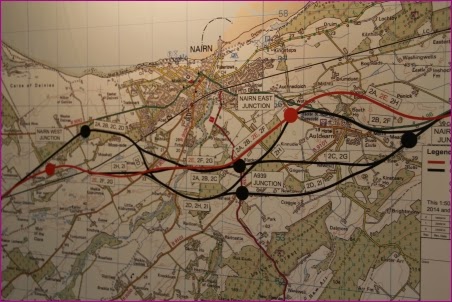 The preferred route in red. Larger image and others here 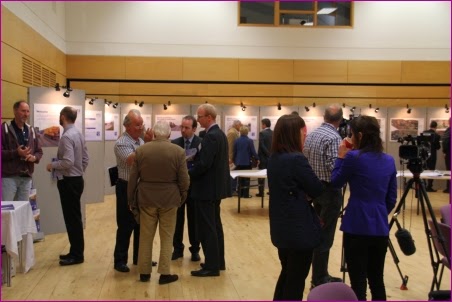 A large turnout as the preferred option was revealed for the A96  bypass. Now there will be another round of consultation with those immediately affected by the route.

Dick Youngson of Suburban CC told the Gurn that he thought it was a good route and that Transport Scotland had listened to the Community. Elsewhere however, there was at least one member of the local farming community unhappy with the route. Television and other meejah folk were there so no doubt more feedback will be expressed on the box tonight.

Transport Scotland have also published details of the route online here.  Plus panels from the exhibition here.

The exhibition is open until 7 p.m tonight (Fri 3rd October).

Give me a spade. I will start digging the foundations now.

Everyone wanted a Nairn Bypass. Faded Lib Dem Bypass stickers can still be seen in the rear windows of some Nairnite's cars.

But now that the 'referred route' can be seen on a map like a huge gouge across our county some are not so keen. It might leave the A96 looking like an empty car park (will they still keep all the traffic lights) but might it also keep visitors away from the town (careful what you wish for) as they speed past on the smooth tarmac

Some unlucky residents will find themselves living in an island, A96 on one side of their property and the bypass on the other. Others will find their houses devalued and possibly difficult to sell should they wish to try and move away from the new car transporter

Personally I would double the tax on car fuels and make bicycles tax free. The fuel tax would be used to subsidise public transport to make it very affordable and then we wouldn't need the bypass, would we?

Too late. We're mainly a nation of car lovers and the bypass battle has been fought and won

Well done one and all, I'm sure it'll be a very nice scar across our landscape and future generations will remember all that were in favour of such a scheme

Lovely but how are we going to pay for it in this continuing time of austerity?

I think you are a little out of touch! You sound like the same person who moans about the high street being dead but still shops in a big chain supermarkets.

Times are changing and we have to adapt to change. I think it's a shame we have to have a bypass (as I do the whole high street situation) but I am also a realist who understands that the way we do things has dramatically changed and for the town to evolve we need to embrace these changes!

If Nairn sells itself correctly, then we won't lose out on tourism, in fact we may even gain more since the traffic in the town won't always be at a stand still and therefore not putting potential visitors off stopping.

Embrace change! It's the best thing that could happen to this little town. :-)

@ Jerry, you say the route cuts through protected woodland, have you got links to information etc for that?

"Embrace change! It's the best thing that could happen to this little town. :-)"

The majority of this little town and the rest of Scotland voted No for no change in the recent referendum, and despite the promise of immediate change via the vow nothing has happened

Might I suggest you're the one who is a little out of touch?

Almost every town along the A96 has been bypassed, so why should Nairn be any different? I remember approximately 30 years ago when there was opposition to the Auldearn bypass, and now we couldn't imagine Auldearn without it, make no mistake, Nairn needs this bypass and the sooner the better!

HI Jerry, Yes Russells Wood gets it virtually through the middle. Granny Barbour's Road won't be quite the same after that that's for sure.
The Transport Scotland doc states on environment: " Option 2E performs less favourably in relation to landscape and
visual, habitats and biodiversity, cultural heritage and agriculture and
forestry land. For air quality the environmental assessment concluded
that the effects of all the route options were broadly similar."
Nothing about special protections etc.

how many worms will meet their doom getting squashed by bulldozers?save the worms I say.

Brilliant. It'll be even quicker to get to the inverness shops.

Cheers for the information and links, Graisg, much appreciated. :)

its a shame, i grew up playing around there, nice quiet area. sainsburys already stomped all over several of my hangouts from a few years ago. will be sorry to see it get trashed.

Not wanting to harp on about the "vote" but exactly how do you know the majority of Nairn voted NO as this came under Highland, not under each individial Town. Unless you are privy to information the rest of us aren't.

Through Granny. Barbours wood, is the new cemetery not going up near there....does not sound like a good plan.