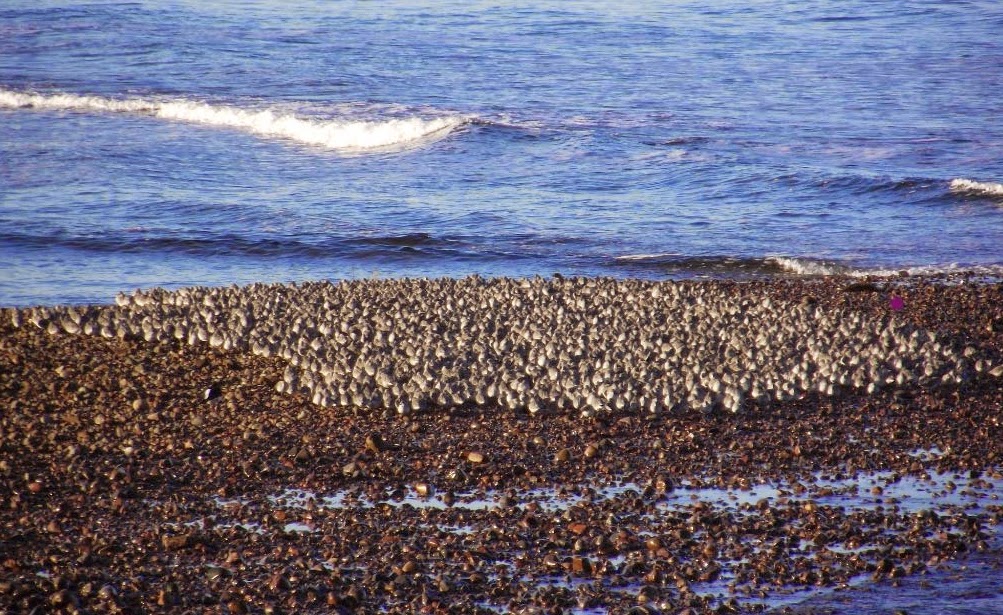 David Shaw sent us the above picture (click to enlarge) of around a 1000 Knot on the shingle bank by the west pier, just after low tide yesterday. He told the Gurn:

" I have not seen them at this spot before. Shortly after I took the picture the incoming tide caused them to lift and fly round to their usual spot on the east beach."

The Information notice board that was due to be filled by information by River Community Council after being bereft of anything since its installation nearly two months ago remains in an information-less state. The Gurn understands from a source close to the River CC hierarchy that a key cannot be found for the new facility.

Sadly Semi-Chem had one of their windows smashed overnight but on the brighter side Concept Gifts is reopening tomorrow. The weather remains mild for November, the gorse is out on the dunes by the caravan site and on the Auldearn Burn a fine specimen of Giant Hogweed appears to be untroubled by the two light frosts we have had so far. Further along the burn a car was lying on its side in the water this morning. Hopefully no one was hurt after it left the Grantown Road and headed down into the burn. Migratory trolleys have also made their first appearance at the Jubilee Bridge this season.

We were given a few more images from the Christmas Lights ceremony on Friday and they can be seen at the bottom of this flickr page here. Thanks very much to our regular reader who sent in the images.

The day (or the daylight perhaps) is done now, the boat is in, the sunset was a reasonable one and from the brae the town’s street lights can now be seen in all their glory.

Have a good week Gurnshire, and finally here’s a suggestion from another of our readers – anyone fancy a try at a car free town centre on Sundays?

Giant hogweed, flowering gorse, migrating trollies, it's far too early for all these things - the season's truly are all mixed up.

Hopefully someone will remove the car from the burn soon before it causes any pollution.