This evening we heard reports at Gurn HQ of the traffic lights at the library carpark and up at Sainsbury's behaving badly - very badly indeed with the Sainsbury's lights just allowing about six seconds of a green light before extended red periods. After a snooze in front of the telly this observer headed up for a look. It was after midnight but traffic was still passing through town to be held up by the misbehaving green men.

Bear turned up on the scene and their workers soon had the Sainsbury's lights back in action. It looked like a button jamming there - possibly due to the low temperatures? The Bear boys then headed into town to tackle the other set of lights but didn't seem to have the same instant success achieved on the eastern edge of town. Hopefully they will get it sorted before the morning rush starts. 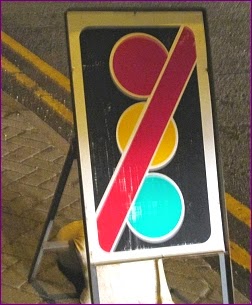 Here's a video of the situation earlier which demonstrates how the pedestrian sequence was doing its own thing at both locations.

UPDATE: 06.30 20/01 The lights at the Library carpark are now off. Presumably efforts to fix them earlier failed and a decision must have been made to enable traffic flow through the town by turning the lights off until a solution could be found. Signs have been put in place to warn drivers that the lights are off.

What we need now is for all the lights to misbehave and for Bear to switch all of them off, preferably for a very long time

how much longer do we have to endure these damn lights,there is no need for half of them,only 4 sets of lights to get through inverness high street,and that's a city,and 8 sets in Nairn from the west end to sainsburys.a disgrace,a shambles and a joke

Maybe the green men should try snoozing in front of the telly?

All I hear when speaking with friends out with Nairn is how bad the traffic and traffic lights are! These are people who do not come to Nairn often and they know and make jokes about the town! "it used to be the fastest town in the north, but not anymore"!!!

I know guys who joined one of our golf clubs in Nairn as it was quicker to get here than go through Inverness as he live on the Nairn side of ness, He is no longer a member as in the golf season its not any quicker and he's fed up with the lights!!!

Some years ago, in a village to the west of Inverness, trunk road traffic was delayed from time to time by a misbehaving set of traffic lights.

The usual cause was a wad of used chewing gum parked on the pedestrian button to hold it in. Simple enough for the locals to remove it themselves, and normal operation was resumed.

Naturally the culprits were never caught. Now of course DNA tests would enable the perpetrators to be identified.

I do hope that technology has improved these buttons by now to make them chewing gum proof?

This observer just happened to be there when the Bear guys arrived at the Sainsbury's lights Jim - they didn't detect any chewing gum.