Recently we heard from Morton, one of the Kingsteps bridge-building brigade. Gurnites will probably remember previous article here.

Morton told us : “As a follow up to the recent post advising of the latest loss of the Kingsteps “rickety” bridge I can report that a perfectly amicable meeting was held on site with the RSPB site manager and The Highland Council’s Access Officer and two representatives of the Kingsteps bridge builders. The purpose being to explore opportunities of reinstating the bridge following the RSPB’s intervention on Health & Safety grounds.

It is clear that the reinstatement of the former “rickety” bridge is no longer an option and will not be permitted by the RSPB (should perhaps be The Royal Society for the Prevention of Bridges!). The only alternative would be for a properly engineered bridge which would fully comply with the standards required by the numerous public bodies, each of whom would require to be consulted and their approval obtained (these include but not limited to RSPB, The Highland Council, SEPA, The Marine Conservation Society etc.) even then it is unlikely that the RSPB would take on the maintenance and liability of such a bridge. An alternative would be for a Community Trust to be formed which would fund, maintain and take on the liability but again it would be subject to the approval of the various interested parties.

The bridge builders are rightly taken aback by this turn of events as the bridge has been in place for a good number of years without any objections from the RSPB. They have been undeterred by the regular loss of the bridge to storms and tides and have happily rebuilt it on at least four occasions in recent times. However whilst the forces of nature have failed to stop them in their endeavours they have reluctantly decided to step down in the face of the overwhelming forces of bureaucracy and today’s health and safety regime.

The venture was always intended to be no more than a bit of fun – fun for the bridge builders and fun for its many users both locals and holidaymakers who enjoyed the crossing as reported below by one of the many holiday visitors who much appreciated its challenge:

“On the return we came across the "makeshift bridge". A quirky little bridge that would make any cub scout proud. ”

And by another visitor to the area

“Had a fair bit of fun on this bridge. Took me back to my Girl Guide and Venture Scout days.” 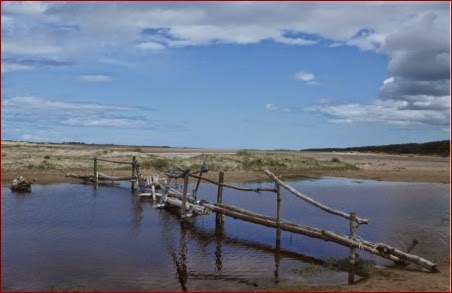 The Gurn also asked the RSPB for their reaction to the outcome of the meeting and their site manager Steph Elliot told us:

“I met with Tom and Morton on Friday morning, and we had a very friendly meeting. I explained that, under the Occupiers Liability Act, we have a duty of care to ensure the safety of our visitors. Whilst the bridges that have been variously built at Kingsteps over the past few years are certainly feats of engineering, they do not meet the safety standards that we are expected to provide for visitors. Regardless of who erected such structures, it would be the RSPB who would be held responsible for an accident resulting from using the bridge, and so I respectfully asked that no further bridges be built.

We discussed whether it would be possible to build a bridge that would meet the expected standard here. I think all agreed that the ground is a very dynamic system here – hence why all previous bridges have been washed away in storms or very high tides. The route of the channel changes regularly, and the dunes have eroded in winter storms giving less protection. It would be difficult build a ‘safe’ bridge across this channel – it would require a wide span with concrete abutments to ensure stability. It was also need to be much higher in order to avoid the highest tides. All this engineering would require consent from SNH due to the international protections afforded to Culbin Sands, and probably also licences from SEPA and possibly Marine Scotland. Those consents would not necessarily be given. We are probably talking thousands of pounds for such a construction, resources that the RSPB does not have. And I think that we all agreed that such a structure would not be in keeping with the wild nature of Culbin Sands, which is what we all enjoy the area for.

Whilst I am sure this is not the outcome that the ‘bridge builders’ had hoped for, they agreed that a bridge in this location was a convenience rather that a necessity.”

Gurn Comment: we are where we are in this new millennium some will say that the Health and Safety culture has gone too far and others will point to other, darker times, when no such legislation existed and compare the improvements in working conditions and public safety. Perhaps some could be forgiven for thinking though that we have passed completely into a world where there is no turning a blind eye to the sort of activity the Kingsteps bridge builders were engaged in. They made sustainable use of materials that were literally washed up where they were needed. People in positions of authority are of course now under every obligation to act when they become aware of a situation that contravenes rules and regulations. To be fair to the RSPB the weight their responsibilities arising from situations like this one have reached the point where to turn a blind eye would just not have been possible. The precautionary principle is sovereign. Where does it leave the likes of the altruistic volunteers from Kingsteps who stepped in to fill a need and have a bit of fun at the same time though? Have we legislated ourselves into a world where proactive behaviour for the common good is on its way to becoming totally outlawed unless sanctioned by a host of public bodies and other organisations?
Posted by Graisg at 11:26 PM

a bridge too far said...

Was there not mention of some sort of coastal funding in the Gurn not a couple of articles ago?

Would a simple sign as you see in many other places, car parks etc. stating that the RSPB are not responsible for any damage, accidents or injuries caused whilst using this structure. it just seems to be following the the trend in this country now of quoting health and safety to stop us doing many things, or is it just that many peole are falling fowl of the 'lets litigate culture'.

Are the RSPB not tenants on this land, renting it from the Brodie estate (forgive me if I'm wrong) and therefore should it not be for the estate to rule about the bridge?

The land ownership angle interested this observer because of this issue and other ongoing matters. Steph Elliot also stated to the Gurn on land ownership: "The RSPB reserve at Culbin Sands is leased from two landowners"
and you will not that also quoted is the Occupiers Liability Act.

The act states that there should indeed be warnings of any hazards and taken to extremes I assume visitors should be made aware of tides and water etc by the RSPB. This would be costly as there are many entrances to the area through the Culbin etc

But section 4 of the act mentions landlord liability. I take this to mean that if the RSPB failed to dissuade the bridge builders then they could also enlist help from their landlords IF the bridge was found to be a risk to public safety?

Can of worms really, I mean God forbid anyone could wander onto the area and drown, who would be at fault then?

Maybe the Gurn could take this one to court :-)

@ anon where you getting that from anon - have you a URL for serious students?

People of course cannot be stopped from walking in that area and are there not still some signs around in that area put up by the Council as well as information in the carparks? Over and above any legislation we also have a duty of care to ourselves I suppose. Anyway....

A brief Google comes up with this SNH guide. http://www.snh.gov.uk/docs/B54968.pdf

and just a brief para or two from that one: "PART ONE: STATUTE LAW
NOTE – This is not a definitive statement of the law – take legal advice as necessary.
1. OCCUPIERS LIABILITY (SCOTLAND) ACT 1960
An ‘occupier’ of land has a duty to show care towards people on that land. The level of this duty of care is the level which it is reasonable to foresee will be needed so that people do not suffer injury or damage. The occupier must consider injury or damage which may be caused as result of any dangers due to the condition of the property, or of anything done or omitted to be done
by the occupier which is his legal responsibility.
The Occupiers Liability (Scotland) Act 1960 states:
“The care which an occupier of premises is required, by reason of his occupation or control of the premises, to show towards a person entering thereon in respect of
dangers which are due to the state of the premises or anything done or omitted to be done on them and for
which the occupier is in law responsible shall……..be such care as in all the circumstances of the case is reasonable to see that the person will not suffer injury or damage by reason of any such danger.”
(Section 2.1)
Occupier – The occupier is defined as the person (or body) “occupying or having control of land or other
premises". Where premises are leased, then the respective duties of the landlord and tenant will depend
upon the terms of the lease. Where a landlord is responsible for the maintenance or repair of the
premises, he has to show the same duty of care to persons on the premises as an occupier would. Different people exercising different degrees of control could owe a duty of care at the same time.

Well a simple solution would be to tie together some of the traffic lights when we finally get rid of them. That would make a very sturdy bridge would it not, attach them to some empty barrels so it can rise and fall with the tide. Great way to recycle.
a sign beside it saying

Green, its safe to cross,
Amber, watch it could be dodgy,
Red, do not cross.

Run a wire to a nearby house for power ;-)