Gurnites might have seen the impressive display of artwork from the pupils of Millbank and Rosebank up at Sainsbury's recently. Lorraine, the store's PR ambassador, told the Gurn:

"The children of Millbank and Rosebank primary schools sent in pictures and poems. These were displayed on our windows at Sainsbury’s, Nairn and were admired greatly by our customers. This was part of Scottish week celebrations and the entries were of an extremely high standard.

Rosebank school had a burns supper of haggis, neeps and tatties which was provided by the Sainsbury store for 60 pupils and staff. Prizes were awarded to the children at both the school assemblies." 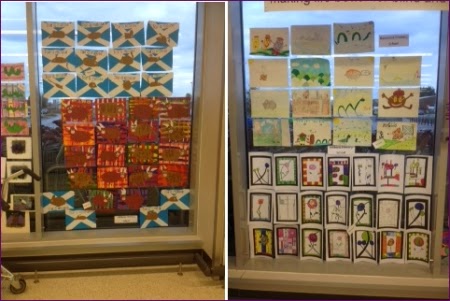 Well, after more than a year, congratulations for your 10th blogiversary.