During discussions at the Cawdor Community Council meeting last Monday night questions were raised about recent damage to the White Bridge when a vehicle hit the parapet in icy weather. The subject was initially raised when Sgt Graeme Erskine, the Scottish Police rep at the meeting, was asked if he had any information about what happened. Cllr Roddy Balfour then spoke about the damage:

“If that bridge goes the only vehicle entrances to Cawdor will be through Nairn or through Daviot which is just about going to cut Cawdor off.”

Tim Smith chairing the meeting said: “Am I right in thinking that the way it is built has protected in from being rebuilt in a similar fashion?”

Roddy responded: “It can’t be rebuilt. It’s a tremendous bridge. A friend of mind was professor of engineering at Melbourne University and he used to come over quite often. The one place he would visit when he came here was that bridge. Apparently it is a classic example of a pre (kind of) industrial age bridge. It’s perfectly built. The stones, and there’s not a lot of mortar in it, there wasn’t a lot of cement in those days, but it’s so finally balanced. It’s such a good bridge but it only needs one truck or something to slide on it and that’s the end of it. And the estimate for rebuilding it, it wouldn’t be rebuilt of course, there would be a straight bridge across there. The estimate would be for rebuilding is about two million pounds and it would probably take about two years to plan, acquire land etc, etc. So we really are in a serious situation and I would ask people – well I’m sure that people here do appreciate the situation and put it around the precarious situation that Cawdor is in depending what it is really like.” 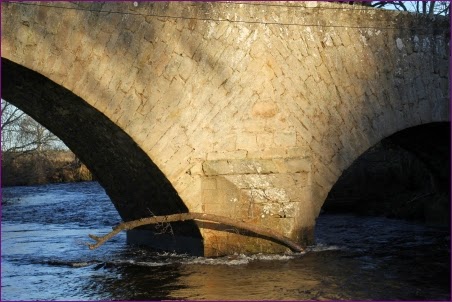 That wasn’t the end of discussion on the White Bridge however, much later there was prolonged discussion about the effect the extraction of timber in the wood neighbouring Culcharry would have on the local infrastructure (more from that debate when time permits). Here’s what was said in relation to the White Bridge...

The meeting heard from the Highland Council’s Jon Taylor that the White Bridge was an acceptable route for the use of timber lorries. 35% of the timber to be extracted from the Cawdor Estate wood at the back of Culcharry will be travelling that way on lorries to Norbod. Jon Taylor was immediately asked by a woman present:

“Is it acceptable though with the damage that has been caused to the bridge? Will that be taken into account?”

Jon replied: “With the damage to the bridge, it was just an accident, accidents happen.”

The West Nairnshire resident continued however: “I appreciate that but now that Highland Council is aware that there is damage to the bridge, has it been assessed to see if it is compromising in any way with the weight of these lorries that are going over? Bearing in mind that it is the main route into our village.”

Jon replied: “I appreciate that but I’m given to believe I’m not a bridges expert myself that the damage is just to the parapet.”

Another member of the public then said: “Can I just add, I think we are being a bit hard here on timber lorries. There’s more than timber lorries going across White Bridge.”

A little later Cllr Roddy Balfour spoke, the Highland Council member said: “It’s amazing it is not considered as high risk because two years ago when Cantray Bridge fell down and it was looked at at the same time and regarded as very much a high risk. I don’t know what is going on, there seems to be one tale from the Highland Council one year and another tale the next.”

The White Bridge is indeed an essential route for residents of the village and the surrounding areas. It is the route that carries a lot of the tourism life blood for Cawdor Castle too, one of the area’s top attractions would be seriously affected by any problems that might occur with the bridge. There was a comment too recently on the Gurn in relation to traffic problems in Nairn:

“We always know if the traffic is backed up in Nairn because the Clephanton Village junction becomes abound with fast moving irate drivers disregarding the 30mph even more than usual...”

The White Bridge carries all the traffic that uses the B9090 unofficial Nairn bypass via Gollanfield, Clephanton, Cawdor and Auldearn – only one set of traffic lights that way instead of nine. A considerable amount of rat-run traffic goes that way and would only add to the jams in Nairn if the bridge were closed. None of that would be a problem of course if the Nairn bypass gets built in good time but presently the White Bridge is the backbone of a very essential route and who knows what its long term future is if present traffic trends continue.

More images of the White Bridge on the Gurn flickr pages here.
Posted by Graisg at 10:23 PM

Highland Council has to take its responsibilities for this bridge seriously. Its own official appears to admit that this is an accident waiting to happen, especially if it is more heavily used by timber trucks and other HGVs.

The Council ought to be thinking about precautionary/preventative measures now, to reduce the risk of further damage to the bridge (and to safeguard the access to Cawdor).

The Council have powers - if they choose to use them - to impose weight or size restrictions on vehicles using the bridge.

If they fail to do so, and simply await the risk of further or more serious damage to the bridge which results in it having to be closed or replaced, the Council will have a lot of awkward questions to answer from people in Cawdor and beyond.

This lovely bridge is a vital link to Cawdor and beyond. It is used by fishermen and many others besides. It is being woefully abused by huge lorries and is fit only for small vans and cars. The damage is appalling and if they take as long as it took to fix the Howford Bridge I will not hold my breath. The fix to Howford was awful and instead of replacing the stones, they took away most of it. Its a mess now .

It really comes down to a simple decision for Highland Council, appease the logging companies and Norbord in allowing the lorries to slowly destroy the bridge,
or appease the Residents of Cawdor and surrounding Villages to save a life-line of a bridge for them to live out their daily lives with the only realistic route to much needed amenities
Does the Council need (once again!) to be reminded of who they are supposed to represent and hold the interests of?

This observer is inclined to agree with the statement made by someone at the meeting: “Can I just add, I think we are being a bit hard here on timber lorries. There’s more than timber lorries going across White Bridge.”

It's not a matter of picking on timber lorries. A sensible weight or size limit would apply to any large vehicles irrespective of what they were carrying.

The key issue is what is the best strategy for preserving and protecting the bridge. It makes no financial sense to permit a level of usage now which leads to bridge-damage and gradual disintegration, if this then results in its closure, years of delay, and millions in capital cost to build a replacement.