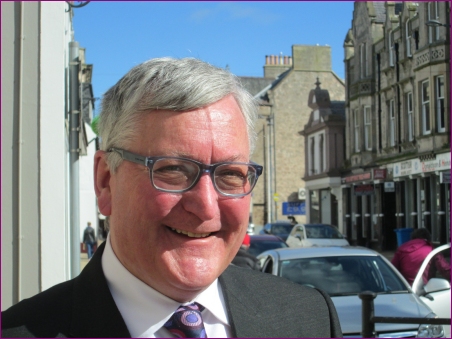 Came across Fergus in the High Street this morning. Are you one of the contestants in the Holyrood election this time round? Send the Gurn pictures of your activities in Nairn and we will be delighted to publish.
Posted by Graisg at 11:50 AM

Yet another SNP coronation?

No. A coronation is what you get with an unelected even unelectable monarchy. If Fergus gets re-elected then that is called democracy. House of Lords and Monarchy = nothing to do with democracy. England voting Tory = democracy for England.

Shame that dissenting voices cannot be listened to without being crushed. Nairn's version of the new, kinder, politics perhaps :-) As for Monarchy, even the SNP supports the continuation of that.

Anonymous @ 12:25 & probably @ 2:37.
IF you can get enough of the electorate of this constituency to vote FOR another politician or party that could prevent Fergus Ewing from retaking his seat at Holyrood. The way it works, you see, is that the politician who gains the most votes wins - its democracy. Even then though Scottish Democracy allows for failed politicians to still get elected using the List System - which I see most of the BIG BRUISER politicians in the laughably major parties are all on.
Don't forget the tories got power in Westminster on only 36% of the vote which means 64% of the electorate voted AGAINST them - the SNP got more than 50% of the vote in Scotland - Which reflects true democracy?
Oh and can we declare the results of the last GE as void now that the tories are accused of breaking the law to win it.

50% of the votes but all the seats = democracy?

I know that a majority of my SNP friends want another referendum NOW! However Nicola says NO! SNP democracy in action.

The company has launched a consultation with staff affected by the planned closures.

The retail shops, which sell electrical and white goods, are predominantly sited across the north of Scotland

The outlets, along with Scottish Hydro Electric's online shop, are expected to close by 15 May.

SSE said it aimed to avoid redundancies "wherever possible".

SSE director of domestic retail Stephen Forbes said changing shopping habits and more customer choice meant the shops had been loss-making for a number of years.

"I know that a majority of my SNP friends want another referendum NOW! However Nicola says NO! SNP democracy in action."

Nicola is not saying "NO", she is saying "the Scottish people will decide when the time is right" Because a couple of your "SNP friends" want "another referendum NOW!" doesn`t mean this is the right time ... it WILL happen but only when the majority of the people want it to happen!

@9.56
Err, are you suggesting that it is the SNPz fault that people vote for them?
And btw. Who imposes the voting system?
The SNP have always voted FOR more fair systems of electing people.

My main issue with the SNP is that their ultimate aim is to separate Scotland from the UK. The party has little regard for how much this may negatively impact many ordinary Scots in lost jobs and insecure pensions. A price worth paying is the SNP view.

The SNP set out to divide the UK and has succeeded only in dividing the Scottish people. SNP a sect rather than a political party. Discuss.

Discuss. Sorry unable to until I get the latest mind-control rays dose when they beam them out of Holyrood during the night.

@12:03
No so much a sect as a cult. Facts that don't support its case are simply ignored. e.g. collapse in oil prices.