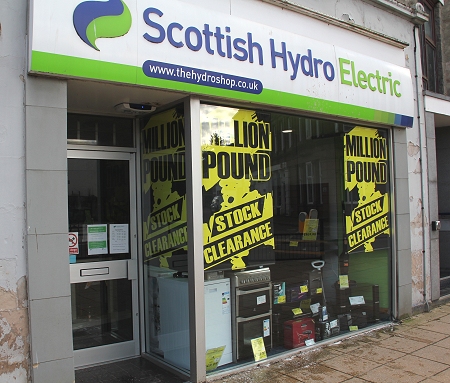 An iconic store on the High Street is to close as part of the SSE company's decision to shut its remaining 37 shops in Scotland. The company states in a press release:

"SSE has today announced it is taking the difficult decision to close its 37 remaining Scottish Hydro Electric shops in Scotland, along with its associated online shop.
The retail shops sell electrical and white goods and are predominantly sited across the north of the country.

SSE has entered into consultation with its 119 employees affected by the planned closures and will discuss possible redeployment within the SSE plc group. It aims to avoid redundancies wherever possible, although if this is unavoidable, enhanced terms will be offered to affected employees during the consultation process.

He said: “Customers’ shopping habits have changed considerably since these shops were first opened with more and more people shopping online, especially for larger electrical items.

“We know some of these shops have been on local high streets for a long time so we did not take this decision lightly but footfall and sales have reduced considerably and there is, unfortunately, no realistic prospect of that long-term trend reversing.

“Our priority is to ensure our colleagues are fully supported during this time and we will work to redeploy staff within the SSE group where possible.”

All 37 shops and the online shop are expected to be closed by the 15th of May.

SSE employs around 6,000 people across Scotland many of which are based across the north of the country. Each year SSE contributes more than £1bn to the Scottish economy."
Posted by Graisg at 5:24 PM

I went into the Hydro recently, to look at purchasing a Dishwasher and Freezer. Competitive prices, yes... however they wanted a delivery charge or i could collect items. It is not the easiest place to collect large items from.

I got the same products from Curry's, same price but free delivery.

Personally think Nairn is a long way from being fucked anon and handling the changes in the consumer habits a lot better than some other small towns.

Nairn is pure dead brilliant so it is. Where else is better? Where would you rather stay?

Sad times what's left in nairn hight street? Charity shops,coffee shops and hair dressers. Nairn high street is so run down looking compared to other small towns.Next time you are in the high street have a good look up and down at how the place looks.most shops need a good paint for a start.Endless sun set photos of the bandstand on social media sites don't do it for me sadly.

The days when every town had its gas and electricity showrooms have long gone. People just don't use them anymore. It's surprising that the Hydro shops have lasted as long as they have.