Pushed back to the top for this Friday morning - a very important event on Monday night - will you be going? Any thoughts at all? 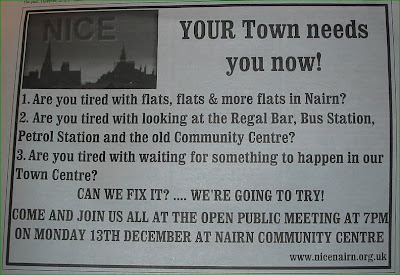 Picture will enlarge - it is an image of a half-page advert appearing in the Nairnshire today.

There is a broad consensus against the Plan B ‘Berlin Wall’ of flats proposed by Highland Council along the A96 in the town centre. The trick for NICE is to coherently harness that willing constituency into positive action to take things forward. There is agreement about what isn’t wanted but what does everyone want instead? Will NICE appear an attractive, credible outfit capable of gathering a public mandate to go further?

Much will depend on their presentation of the consultation data they have gathered thus far and any alternatives they present, including funding. And it is here they might fall into the massive trap that Iain Bain and many others think has been set for them in the form of the local authority telling NICE to go away and come up with money. Will the wider constituency against the Council’s Plan B want to sign up for the long haul and take things in that direction? Perhaps they will be content just to send more warning shots in the direction of Highland Council in the hope that something decent will emerge when the Council return at the end of January with their new plan?

Whatever happens a large turnout is necessary on Monday night – even if NICE goes no further a large crowd will focus the minds of Messrs Sandy, Laurie and Graham (our local government administration rulers) as time moves on towards the elections in May 2012. A really good scheme for the town centre might be one way they could win back a bit of good karma?

Perhaps flats bring in more council tax per square foot than any other options? Surely that cannot be the reason that the council is so keen on them regardless of what locals would like to see? Could it be?...

Such is the drive to build new homes, the Council receive an amount equal to the Council Tax - for a period of 6 years. That is a powerful incentive to build flats instead of considering other options.

@ Iain - have you got a source for that information Iain?

It's a pity Sandown ended up such a mess with 'weapons of mass construction' Trying to build with such huge numbers of houses was not acceptable to the community but something of less density would have been.
Perhaps a lot of very good homes could have been built by now by housing associtions etc to take Nairnshire people off the waiting list

Council house building incentive scheme outlined by Danny Alexander MP at a Federation of Small Business meeting in Inverness two weeks ago. Must be a policy statement somewhere.

Couldn't there be a design competition for Architecture/Town Planning students at say Grays/Edinburgh/Glasgow School of Art to come up with proposals.
I'm sure they did that as part of Ian Wood's plan for concreting over Union Terrace Gardens to turn it into a 'Plaza' and from what I remember, the student ideas looked far better than the professionals ones.
It may not provide a practical solution but might give some ideas and visualisations for what could be done.
Pick the young students minds before they get sucked into the corporate machine.

What's for certain is that the right solution rather than the fastest solution needs to be found and Highland Council must not be allowed to force their dormitory town plans any further onto Nairn. The extended deadline is still far too short for such a significant decision. Nairn should be telling Highland Council what they want to do when they're ready, not the other way round.