The rush to sell the town centre land – are the Inverness Bean Counters behind it?

The Q&A session got underway on Monday night and quickly a member of the audience asked why the Highland Council were in such a rush to put their town centre properties on the market.
Brian Stewart gave the audience NICE’s take on the situation. He stated that NICE were uncomfortable with Highland Council rushing into the sale for two reasons. It was not a great time to be selling land with the market depressed and if they rushed ahead with the sale then somebody might raise the money to buy it but then just sit on it. He mentioned the situation with Rosebank Church and the bus station.
NICE’s second reason was that with the sell-off of the site the town might get another piecemeal development without joined up thinking about what will happen to the land round about. Rosemary Young then asked the audience for comment.
Duthie Hay told the audience that he had asked Sandy Park in the Courthouse at a ward forum meeting if the sale was being driven by the bean counters in Inverness and he had replied that it wasn’t. Duthie then went on to speculate further on Sandy’s response and asked if he was just being a politician.
‘I think you’ve answered your own question,’ said Rosemary 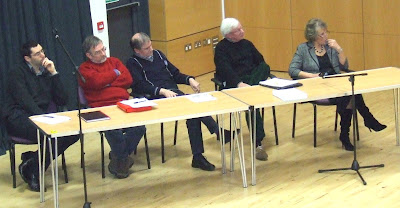 more from the meeting later
Posted by Graisg at 7:04 PM