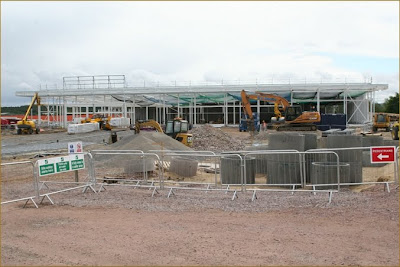 Email ThisBlogThis!Share to TwitterShare to FacebookShare to Pinterest
Labels: Sainsbury's

Anyone know what the blue steel building thats going up across the road is?

You read it hear first said...

Its The Gurns new sate of the art head office with the latest in technology, wonder will they get a celeb to do the official opening?

Its a new MOT testing sttaion set up by BITZ the car repair people.

A neighbour went to the Community Centre on Tuesday last to register her interest in working at Sainsbury, in just a basic shop-floor job.

There were three representatived of Sainsbury sitting there - they were not exactly run off their feet. There was no line of hopeful applicants desperate to sign up.

In fact, my friend had a chat there, and learned that the expected interest in new jobs in Nairn has not yet materialised.

Perhaps Nairnites don't fancy working so far out of town?

Maybe Sainsbury will have to bus staff in from Forres to open the store next August?

This observer knows several people that would like to apply for a job Jim.
There were rumours that Sainsbury's were to be in the Community Centre. I heard from someone who rang the centre for more details only to be told by the person on the desk there that they weren't certain why Sainsbury's were coming.
Are you sure they were doing interviews? Perhaps more publicity might have helped?

As said by somebody Anonymous there is going to be a new MOT Testing Centre. Well done to Bitz in there new adventure at this trying time as everbody is struggling to survive in buisness. Lets hope they get the support they deserve for there hard work. If they can compete and charge sensible prices and gaurantee the work that they do ie a good job they will get all the support they deserve. I wish them all the best in there new adventure.

As the structure of the new store takes shape I truly wonder as to where the figure of Sainsbury's employing 300 staff came from?

I appreciate that some may be part time but the building just doesn't look large enough to accommodate so may people.

Perhaps the construction crew were included in this figure?

Maybe the expected interest has not materialised because they didn't tell anyone they were coming? A few high level jobs seem to have appeared on their website but nothing below manager. On the other hand maybe that's not why they were in the Community Centre last week? Time for Sainsburys to interact and communicate with the locals and let them know what's going to be required?

I remember hearing that they were to hold recruitment days. You would have thought that if it was last week that they would have advertised! If not by the way of The Gurn then by the Nairnshire at least.

Can't help but think the new Sainsburys doesn't look that big at present, especially when the structure will need to cover warehousing as well as shop floor. Hope we haven't had a big fight to allow an out of town supermarket, only to find it only a little bigger than the in-town one!

Well, if you consider that such a business has a fair number of backroom staff who you won't see (goods reception, checking and warehouse operation) plus the shelf fillers, checkout operators, cleaners and supervisors, and the office personnel (someone has to count and reconcile the tills and sort the cash for the armoured van pick-ups), plus the wages staff, general support, nurse, computer staff, canteen workers, and the folk who put up point of sale info (promotions etc) and keep the shelf-edge price labels up to date (you'd complain if the prices were wrong!) that's quite a few. Remember they will have at least 30,000 stock lines (different items) to control.

Then add the filling station cashiers and cleaners, the cafe staff, specialist butchers, bakers, fishmongers, deli prep, and non-food staff, you can see it mounting up.

Then look at the opening hours. Should they be there 6 am to 10 pm, 7 days, that's two full shifts plus cover staff for days off, say two and a half shifts, many of whom will be part-time.

Plus, a store that size may well bring in a night shift to carry out cleaning and shelf filling, even if the doors are locked.

So I have to say, three hundred staff or equivalent with part-timers, seems to me a very tightly run ship.

when sales plummet and the co-op closes, folk will be queing up for a job in Sainsburys, I don't think they will have a problem employing staff!!

These buildings always look small.. its because they are set in a area that is so large around them

I heard today that the construction across the road was going to be a travel lodge?!
Would be nice to see the eyesore on the corner in front of Hendersons get taken down - hopefully the high winds will do the job overnight!