Decorations go up on the Christmas tree

It was wet, it was windy, but thanks to the crew from Nairn, when you were a Bairn, the Christmas tree outside the Royal Bank has been spruced up and is looking decidedly more Christmassy.  Chief Elf, Tommy Hogg, had brought along the decorations and was there to lend a hand and keep an eye out to make sure there were no Nairnites dangling dangerously or precariously from the tree. 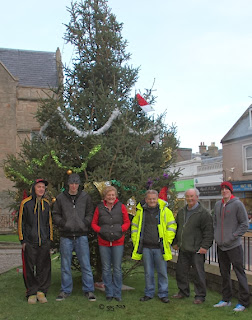 The decorations were purchased and provided by Nairn River Community Council in response to a request from Stephen Smerdon and others who were concerned that the Christmas trees were lacking in festive adornments, something which is particularly noticeable during the day when the Christmas lights are not switched on.

Tommy told the Gurn that due to the short notice the current solution is only temporary but now that the situation has been highlighted it will be discussed at the next joint Community Council meeting to see if a better outcome can be found for next year.  He also thanked Nickle and Dime for their very generous discount towards the decorations. Steven Smerdon thanked everyone who turned up and also thanked all those who had dropped off spare decorations to Taxi 24/7.

Unfortunately, due to the very windy conditions today, only part of the tree has been covered and the tree in Castle Lane may be done next week.
Posted by Graisg at 11:14 PM

@ K - if not satisfied why not arrange to put some more decorations on yourself?

no matter what you do for Nairn there is always people that complain about any effort locals make to brighten up the town ,'armchair critics'

Has Santa returned to Murd and Jock's riverside tree? The bairns are worried that he's still missing!

i saw the volunteers out in the atrocious weather that day doing there bit for the town , a howling wind and pouring rain and still they carried on , i find it tottaly unbelievable that anyone could have the neck to even think about complaining about the wonderfull effort made, and where was @k when these guys were doing there bit ?

No reports of Santa yet anon :-)

Breaking news, Santa is back on the Riverside tree :-)