It was the second meeting of the Nairn Badenoch and StrathSpey area committee today and it took place in Kinguissie this morning. There were a few Nairn items on the agenda including a Nairn Common Good report. Before the debate on this item got underway Liz said: 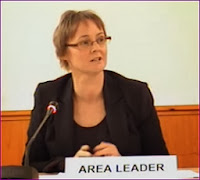 "I’d just like to highlight that this is a monitoring statement that’s set out at the end of October, there are timing differences between the costs incurred and the income collected and there’s rent still due to come in. There should be a surplus at the end of the financial year.”

”Bearing in mind that I recently found out that I’m actually, I suppose, involved in the Nairn Common Good Fund. I found this report, to be honest, appalling. If the figures that are meant to be there are not there that actually makes it worse because if you look the figures on the page at the moment, it you take out the odds and ends like the income from the Nairn games that’s not necessarily applicable every year. There’s a potential loss of eighteen and a half thousand pounds. That’s a 64% loss on your annual income. Over a 10 year period that would be a hundred and eighty thousand pounds loss on your annual income. So really, could we have this as report that’s very detailed, right up to date so we can look at not only the figures but what is wrong – because there’s something wrong.”

Liz then said: “It is a snapshot, an interim report and there will be a budget coming.”

One of the officials, William Gilfillan then commented: “Councillor Lobban is right, I wouldn’t want to duck the issue. We are stuck with some of the historical aspects of this particular reporting mechanism as well. And what the chair has said is that a good way forward would be to agree the budget at the start of the year. That is normally how Common Goods would be looked at. And then you would try to monitor that throughout the year to maintain yourself within budget. Some of the historical stuff goes back a long time and I guess goes right back to when the rents were agreed for some of these particular disposables here; where they are quite low and they are stuck with 99yr leases on them. Somebody in the past has done that. So in terms of putting all this together we will agree  the budget at the start of the year. [...] which will be difficult because historically Nairn has not had enough money to pay against expenditure against income – that needs to be looked at.

After another intervention from the Chair Michael Green spoke:

“I just agree with Cllr Lobban, to a large extent these accounts are not really acceptable, they’re not to an acceptable standard and they are effectively not fit for purpose.” 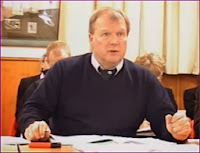 Michael continues with comment about proposals for further action to be taken and then continued: “Going forward there are certain issues in the Nairn Common Good Fund, not least the fishing levy the rates we have to pay – we receive a peppercorn income but we have to pay currently £9,600 which if you take it and analyse it on the 99 year lease, effectively it is a million pounds plus; the requirement we will need to pay if things continue as they are – could end up trading insolvently.  That needs to be addressed and we are looking at ways to address that."

Laurie was the next to speak: I just think the report shouldn’t have been brought to this committee in the 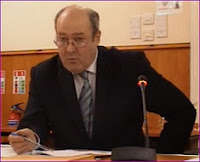 state it is in. I think the officials haven’t spent enough time on it really – it wouldn’t take a lot to bring it up to standard. It just shouldn’t have been brought in the state it is in.”

Cllr Lobban then continued: “Chairman, is there any way we can have an independent legal opinion on to any legal wriggle room there  may be on some of these historical leases, because with what my colleagues is saying is these could be a major part of the problem.” 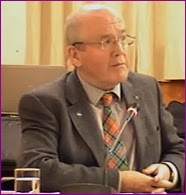 Liz was in agreement but what she was to say next was perhaps indication of the (as yet) weak frontiers of the powers bestowed upon the new area bodies: “The historical leases are a big part of the problem and it would be good to get independent legal advice on that but I don’t know if it something we could agree though as an area committee. I think it is something we need to try and pursue as a ward.”

Colin then made a few brief comments including: “Clearly it is helpful to have external scrutiny from some wise minds here as well.”

Liz then finished with another comment: “I would just like to note the support that Highland Council have given Nairn Common Good through their writing off the cancellation of the 390,000 debt and the refund of the legal expenses which were charged in error.”

Update - the video is now on the Highland Council site.
Posted by Graisg at 9:38 PM

I find it interesting that it's councillors from outwith Nairn who find shock/horror at the report. Would Nairn councillors have been similarly outraged had the meeting not had outsiders attending and commentating on our Common Good? It's not as though much of what the report finds is new

I (sad person I am) watched this webcast. An interesting experience to say the least, and one which I would recommend to everyone to do at least once in their lives, as it gives you an insight into some of the goings on of the council, the officials and councillors.
To me, for some reason, the Badenoch & Strathspey councillors performed the best, they asked more pertinent questions and seemed to be more forceful in their querying of officials than our own famous four, who all seemed to be too nice for their own good. Maybe they have a different relationship with the officials or maybe they have a more informal, relaxed relationship with the Area Leader?
If a word graph was composed from the meeting I think the most used word, especially from Liz Macdonald, would be ‘positive’. It was used so many times it became a bit sickening, a bit like eating a box of chocolates, once you get to the last one you know you’ve overdone it. It felt like the use of the word was being forced. I know everyone is supposed to be congratulated when they do a good job but when it comes to the officials – that’s what they are paid for, and paid very well.
Another point is why are the presentations so long, 20 minutes? 10 minutes should be enough to get the main facts over, then a Q&A session, anything longer is just padding.
Regarding the writing off of the £390,000 and legal expenses for the Common Good fund, wasn’t that because a large part of this was due to the Highland Council in the first place? So, why all the waffle about “note the support that Highland Council have given Nairn..........”. Are we meant to be grateful for this magnanimous gesture?

The councillors of Nairn ought to be embarrassed if not ashamed that it has taken a member from Badenoch & Strathspey to point out so forcefully that the management of Nairn Common Good is a disaster and a shambles.

People in Nairn have been saying so ever since questions arose over Sandown - both the badly-administered lease and the ill-judged decision to sell the land.

There was pressure some years ago for much greater clarity and accountability over CG management.

Cllr Lobban - and Cllr Green - are right. The figures revealed so far, although they do not present a clear or comprehensive picture, are not pretty. There is something very wrong with the management of the Nairn CG.

Saying that the latest figures are "an interim snapshot" (Cllr MacDonald) is no excuse. There are years' worth of previous accounts on file.

Suggesting that the accounts-report is "not up to standard" (Cllr Fraser) misses the point entirely. Blaming the accountants is misplaced and wrong: they just record and add up the figures resulting from the decisions made by those managing the CG assets - they don't make the management decisions.

Arguing that it's "a historical problem" and all that's needed is to "agree a budget" (Mr Gilfillan) is a cop-out. If past decisions and existing policies are wrong or unsatisfactory, the Council has had years to consider, review and amend them. Nothing has been done.

Finally, the cancellation of debt and repayment of costs wrongly charged is hardly "support for Nairn's Common Good" (Cllr MacDonald). It is simply putting right one of the most grievous Council misjudgments.

The Nairn Common Good, and the Nairn community, has been very poorly-served. Full transparency and proper local accountability is essential. "External scrutiny by wiser minds" (Cllr Macaulay) might be a sensible move. Public scrutiny by the local community would be a good start.

The matter needs to be properly sorted. Perhaps we ought to be asking Cllr Lobban to speak up more often on behalf of Nairn!

I couldn't agree more but as I understand it the area committee only sits four times a year. What's he likelihood of Nairn councillors pushing the matter on their own. I apologise if I'm wrong, but I've seen no sign of this and it's taken folk from outside to raise very fair comments about the awful state Nairn Common Good is in

The Chair's desperate efforts to nullify criticism, discourage debate, flatter officials, and "accentuate the positive, eliminate the negative" were as pathetic as they were predictable.

I also had the distinct feeling that the Chair's remarks were almost all scripted.

This is neither effective local government nor proper local scrutiny.